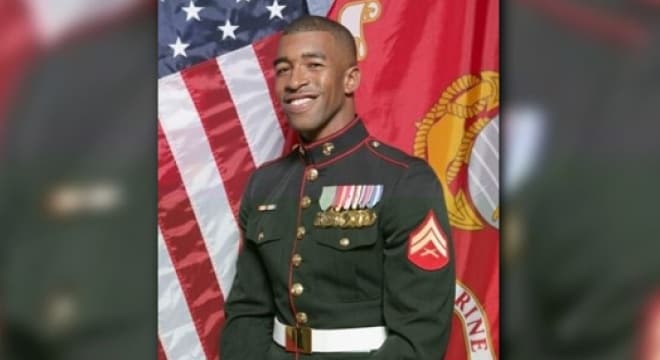 Former Marine Hisashi Pompey was set to report to a New Jersey prison this week to begin a 3-5 year sentence for unlawful possession of a weapon. (Photo: WUSA9)

New Jersey Gov. Chris Christie (R) on Friday commuted the sentence of a Marine facing three years in state prison after being caught up by the Garden State’s gun laws.

Hisashi Pompey was an active-duty sergeant in the Marines in 2011 and visiting the state from Virginia when a friend of his grabbed his handgun from his holster at an area nightclub, sparking a chain of events that saw Pompey facing a mandatory minimum of three years in prison. With appeals exhausted, the former Marine was set to report to authorities next week barring action by Christie, who came through at the last minute.

“Today I signed the commutation order for former Marine Sergeant Hisashi Pompey,” noted Christie on social media along with a copy of the order, dated April 14.

Pompey, a veteran of two tours in Afghanistan, had a clean record prior to the 2011 encounter, but since he did not have a New Jersey carry permit, was found guilty of unlawful possession of a weapon.

Last week’s actions were not the first time the Republican governor took action on those with weapon charges. He granted pardons to Pennsylvania mother Shaneen Allen, arrested in October 2013 after being pulled over by a state trooper with a gun in her car and Steffon Josey-Davis, an armored car driver who received a second-degree felony for carrying his legally-purchased, but loaded handgun in his glove box.

In addition to the above cases, in 2015, Christie granted executive clemency to Todd Doering of Lansdale, Pa.; Brian Lee Fletcher of Buntner, N.C.; and Elizabeth Jane Griffith of Daytona Beach, Fla.; all of whom picked up gun charges while either passing through or visiting New Jersey.

In another instance that didn’t make it to Christie, prosecutors dropped charges against a 72-year-old retired schoolteacher who was facing 10 years in prison Revolutionary War-period flintlock pistol tucked away in the glove box of his car when he was stopped for a minor traffic violation.

Barring passage of a national reciprocity law, those who run afoul of New Jersey’s tough gun laws may have to look for another champion next year as regulations bar Christie from seeking re-election for a third term when his second officially ends in January 2018, though he may seek to run again after 2021.

Correction: The story has been updated to reflect that Christie issued a commutation and not a pardon.