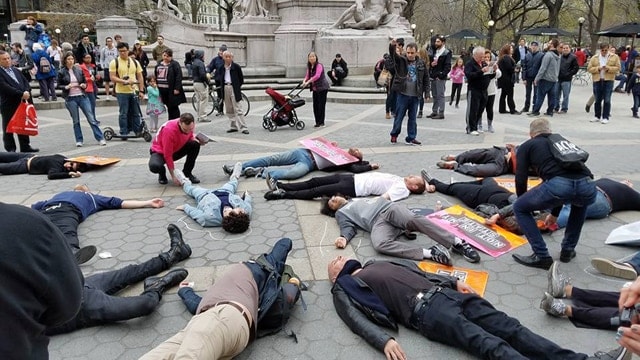 Gays Against Guns hit President Donald Trump hard Saturday with two protests demanding the release of his tax returns and criticizing his support for national reciprocity.

The LGBT gun group, founded in the wake of the Pulse nightclub shooting, hosted a musical street theater performance in Bryant Park criticizing the administration’s policies before joining the city’s Tax March — one of more than 200 organized nationwide — and concluding with a “die-in” protest in Columbus Circle over the National Reciprocity Act of 2017.

“We need the Loser of the Popular Vote to show us his damn taxes and we need to know what’s really motivating his sick agenda of death,” said Mark Leydorf, who wrote one of the street theater pieces performed by the group Saturday. “The Cheeto president and some of his supporters seem to want us all dead. We believe if the whole world could clearly see his motives — and we’ll really only find that out in his 1040s — support for his murderous agenda would collapse across the political spectrum.”

The Washington, D.C.-based Tax March founders say on their website the march represents the people’s right to understand “what financial entanglements and conflicts of interest our leaders have.”

“The public has a right to understand the financial relationships and potential conflicts of interest of their elected leaders,” march organizers said. “Therefore, President Trump must immediately release his full tax returns, as all presidents and major-party presidential candidates have done for the last 40 years. Congress should enact legislation requiring this president and future presidential candidates to disclose their tax returns.”

Trump tweeted Saturday morning “the election is over,” telling followers to investigate who bankrolled the rallies instead.

“I did what was an almost an impossible thing to do for a Republican — easily won the Electoral College! Now Tax Returns are brought up again?” he said.