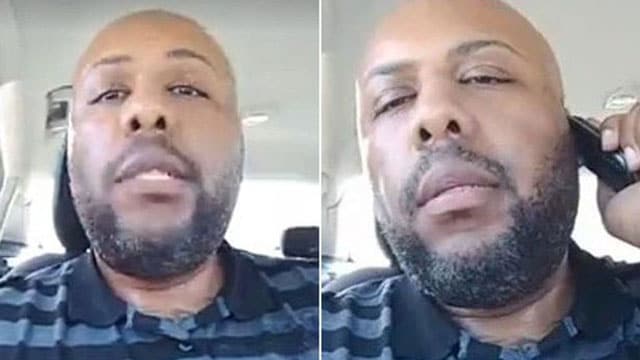 Steve Stephens is wanted by authorities for the brutal slaying of a 74-year-old man. (Photo: YouTube)

Cleveland police along with other state and federal authorities are searching for the suspect who fatally shot an elderly man on a city sidewalk Sunday and then shared a video of the slaying on social media.

Authorities are searching for Steven Stephens, 37, who has been accused of killing 74-year-old Robert Godwin, Sr., Cleveland police said in a statement.

Initial reports suggested the attack was shared live, but the social media giant later clarified Stephens was at one point before the incident livestreaming, but the violent act was filmed and later posted on the website.

In the video, Stephens approach Godwin who tried to brush off Stephens by telling him he didn’t know who or what he was talking about. Then, as Godwin raised his hands toward his face in what appeared to be an attempt to get Stephens away from him, Stephens raised a handgun and, in a graphic display of violence, shot Godwin in the head. Godwin fell to the ground, and Stephens walked away and got back into his car where he continued to record himself on his cell phone.

In one portion of the video, Stephens claimed to have murdered more than a dozen people. However, the Cleveland Police Department said, thus far, no additional homicides have been confirmed. Late Sunday, an aggravated murder warrant was issued for Stephens in relation to Godwin’s death.

Cleveland Police Chief Calvin Williams said in a press conference that the killing appeared to be random and they have no motive at this time. The FBI is assisting with the investigation.

Authorities have reason to believe Stephens is no longer in the state of Ohio and ask that residents of Pennsylvania, New York, Indiana and Michigan be on alert.

Stephens is described as a black male, about 6’1” and approximately 244 pounds. He has a bald head and a full beard, was last seen wearing a dark-colored polo-type shirt with stripes, and driving a white Ford Fusion.

Police warn that Stephens should be considered armed and extremely dangerous, and if he is spotted, authorities say do not attempt to approach him or otherwise make contact, but to call 911 immediately.