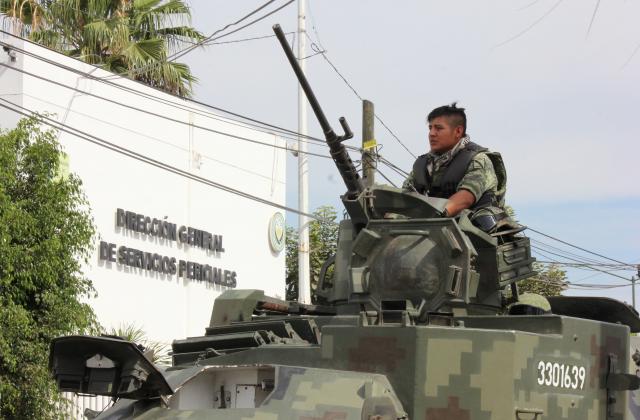 A Mexican soldier mans an armed vehicle outside the Forensic Medical Service after the body of Francisco Zazueta arrived on April 15, 2017. (Photo: Reuters)

Reuters reported that Francisco Javier Zazueta Rosales was killed by soldiers in a shootout on Friday afternoon in the town of Badiraguato, an area near where Guzman grew up and known to harbor supporters of the Sinaloa Cartel.

Zazueta, also known as “Pancho Chimal,” acted as Ivan Archivaldo Guzman’s top bodyguard and was suspected by authorities of helping to launch an ambush attack on soldiers last year.

The Navy said in a statement that soldiers were attacked upon entering the town, where cartel members were holding meetings.

“Yesterday, naval elements went to the area, where they were attacked by alleged offenders,” the statement reads. That attack ultimately led to the shootout in which Zazueta was killed.

No Navy personnel were harmed during the altercation, and several weapons, including a rocker launcher, were found after the attack.

Zazueta, thought to have organized an attack last September on a military convoy transporting a Sinaloa hitman, was detained in February but escaped from a Sinaloa jail  a few weeks ago with other cartel members.