North Korea accuses US of trying to cause nuclear war 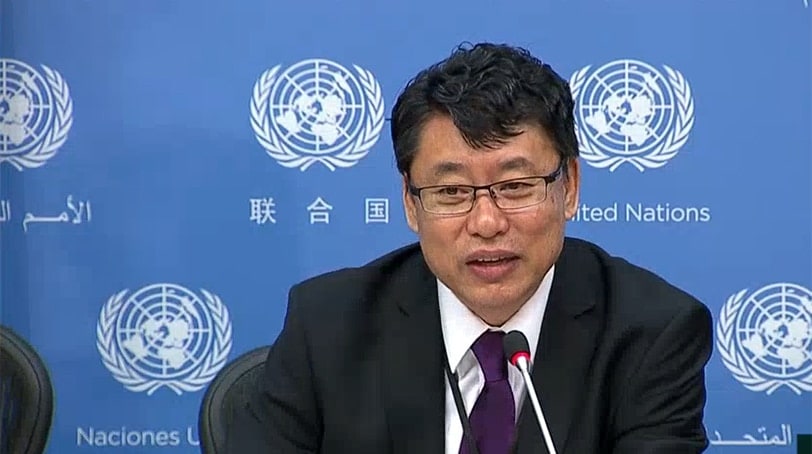 Kim In Ryong, North Korea’s deputy ambassador to the United Nations, speaking to reporters during a press conference on Monday, April 17, 2017. (Photo: CSPAN)

A North Korean official on Monday accused the United States of “saber rattling” against North Korea and attempting to destabilize the Korean Peninsula, thus pushing it to the “brink of war.”

The remarks came from Kim In Ryong, North Korea’s deputy ambassador to the United Nations, during a press conference, in which he said that  American and South Korean joint military war exercises conducted in the region and simultaneous attempts to suppress the socialist country’s development of missile technology violates North Korea’s sovereignty while the U.S. claims “peace by strength.”

The deputy ambassador went on to admonish the U.S. for its recent “massive missile attack on Syria,” saying the Trump administration is “disturbing the global peace and the stability” and insists on “gangster-like logic” that its invasion of sovereign states is to defend the international order.

Ryong said the U.S. is pushing the situation in the Korean Peninsula to the brink of war and created a dangerous situation where “nuclear war may break out at any moment.”

“Certainly it makes people nervous when they’re not quite sure what he means by it,” said Christopher Hill. “And, you know, great powers can’t really bluff. So when you talk in those terms, you’ve got to be prepared to back it up. And I guess that’s what worries people the most.”

On Thursday, President Donald Trump tweeted he “had great confidence that China with properly deal with North Korea,” but that if Beijing is unable to, “the U.S., with its allies, will!”

The Trump administration is currently seeking to negotiate a trade deal with China.