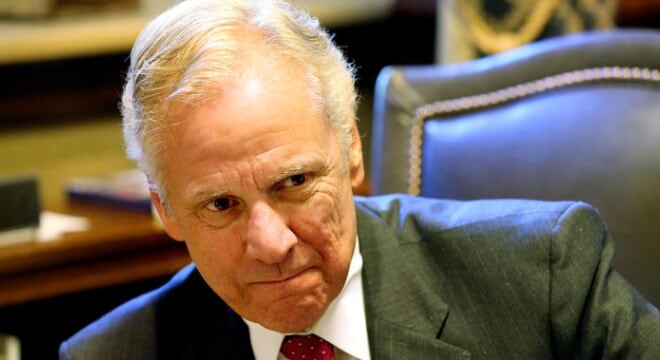 Newly installed South Carolina Gov. Henry McMaster said he will sign a constitutional carry bill pending in the Senate should it reach him. (Photo: Grace Beahm/Post and Courier)

Republican Gov. Henry McMaster signaled last week that if given a chance he would sign a measure to bring lawful carry of handguns in South Carolina without a license.

South Carolina is one of just five states that ban open carry and requires a permit for concealed carry, both of which would be a thing of the past under HB 3930 which was approved by the House earlier this month and is now pending in the Senate. McMaster’s spokesman Brian Symmes said Friday that the governor “appreciates the House’s hard work on this bill, believes it is constitutional and will sign it if it reaches his desk.”

The bill would remove the requirement to obtain a concealed weapon permit to carry a handgun in the state. It would also retain the current permitting system for those who want to take advantage of reciprocity agreements with other states.

Currently, permits are issued by the South Carolina Law Enforcement Division, which had 308,406 active permits in circulation as of the end of last year. The permits cost $50, which is waived for retired law enforcement and some veterans and are valid for five years.

The measure is currently in the GOP-controlled Senate Judiciary Committee and is opposed by several gun control groups and chamber Democrats. Included in the opposition are the editorial boards of The (Charleston) Post and Courier as well as the New York Times, with each invoking the 2015 mass shooting at a historic black church in Charleston as a reason for the state to increase gun regulations rather than loosen them.

“The carnage at the Emanuel A.M.E. Church against African-American worshipers was carried out by a racist gunman who was able to buy his weapon because of shoddy enforcement of gun control laws,” said the Times’ editorial board. “Yet, rather than focus on tighter gun safety, lawmakers yielded once more to the National Rifle Association’s agenda to freely arm the public and enrich the gun industry.”

McMaster, formerly the lieutenant governor and attorney general of the Palmetto State, replaced fellow Republican Gov. Nikki Haley in office in January after she was tapped to become President Trump’s ambassador to the United Nations.

The current session of the South Carolina General Assembly concludes May 11.