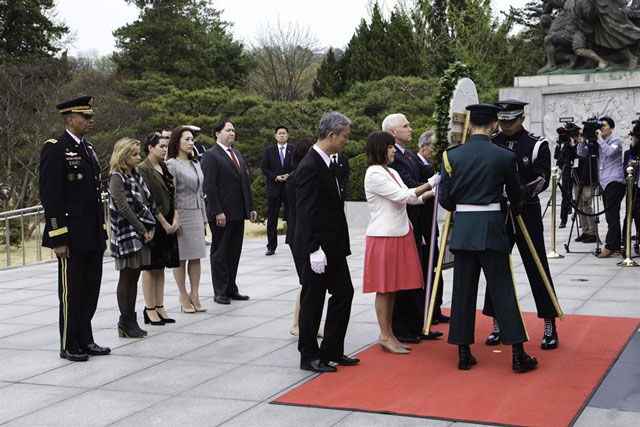 It was Pence’s first trip to Asia as Vice President of the United States, and one where he expressed gratitude to the soldiers serving their country. He also reflected on a history of military service in his own family.

The Vice President’s son, Michael J. Pence, is a second lieutenant in the Marine Corps, and his father, Edward J. Pence, served as 2nd Lt. with the 45th Infantry Division of the United States Army. Edward was awarded the Bronze Star in 1953.

“Like so many who have worn the uniform and come home, my dad didn’t think the heroes were the ones that came home,” Pence said, adding that his father spoke of “friends lost, sacrifices made.”

But Pence also noted that he believed his father would be pleased to see that those sacrifices “resulted in a free and prosperous South Korea.”

“And he told me in no uncertain terms to make sure that I told all of you we’re proud of you, and we are grateful for your service to the United States of America on this frontier of freedom that is South Korea,” Pence said of a recent conversation with President Trump.