Detroit officers shot after being mistaken for burglars 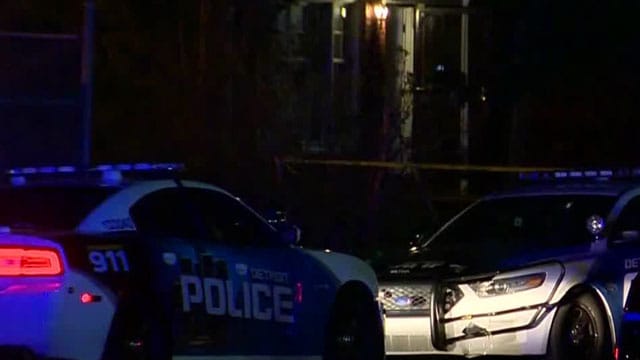 Detroit Police Chief James Craig called the shooting an “unfortunate situation,” while indicating it was a mistake rather than a malicious act. (Photo: Click on Detroit)

Two police officers were shot late Sunday night in Detroit while responding to a call about a burglary, but authorities say it appears the officers were mistaken for burglars.

One of the officers was treated and released, while the second remains in critical condition, Detroit Police Chief James Craig said in a press conference Monday afternoon. A 19-year-old boy is in police custody, but it’s unclear at this point if he will face any charges.

The incident unfolded around 11:45 p.m. after police received three different calls that night about burglaries happening in an abandoned house across the street from where the shooting occurred.

In the final 911 call of the night, the caller told the dispatcher “there’s someone outside with a flashlight.” Investigators now believe the flashlights seen by the caller were those carried by the responding officers, who returned to the home, Craig believes, most likely to talk with the caller about the burglaries and gather additional information about the crimes.

Craig confirmed the officers were in full uniform and driving a marked patrol car when they responded, although the chief said the patrol car may not have been visible from the home. It’s not known if the officers announced themselves as they approached the house.

The officer with the arm injury was treated and released, while the second officer underwent surgery to have one of the pellets removed from his face. Craig said the second pellet is in a location that could prove more complicated to remove. Nonetheless, Craig said they are “optimistic” about the officer’s condition.

Craig said he would not release the names of the subjects involved or the officers.

Craig called the shooting an “unfortunate situation” and said the young man responsible is “extremely remorseful” while his mother, who was home at the time of the shooting, is “very troubled” by the incident. The teen’s 14-year-old sibling was also home when the shooting occurred, but other than the officers, no one else was injured.

Craig said the 19-year-old remains in police custody, but criminal charges, if any, will be determined by the Wayne County Prosecutor’s Office.

When asked about the legalities of gun ownership Chief Craig said he still stands behind the rights of law-abiding citizens being able to protect themselves, but also noted that with that right comes a responsibility to be safe.