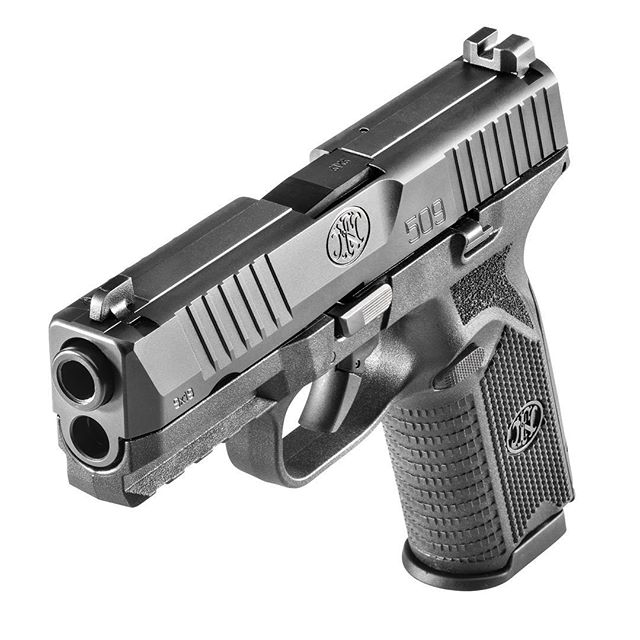 The new striker-fired FN 509 is based on the FNS but had been re-profiled and beefed up (Photo: FN USA)

Based on their FNS Compact platform, the 17+1 capacity handgun was beefed up to meet rigorous military requirements that saw more than 1 million rounds fired in reliability, ammunition compatibility, and durability testing. Changes to the legacy design, in addition to the improved internals, include enhanced grip textures and cocking serrations, guarded controls and a recessed target crown on the 4-inch barrel.

“When the requirements for MHS were released, our team of engineers immediately went to work, taking the successful elements of the FNS Compact and further developing those to meet the needs of the U.S. Army’s solicitation for a new, full-size pistol,” said Mark Cherpes, president and CEO of FN America, in a statement.

Cherpes went on to say FN worked with law enforcement agencies throughout the country since MHS and used that feedback “to further optimize the pistol to far exceed the expectations of our valued customers.”

MSRP is set for $649 and FN is ready to begin shipping two commercial variants with fixed 3-dot luminescent sights and either 10 or 17 round magazines in May followed by two law enforcement models with optional fixed 3-dot night sights in June.

But how does it shoot?

Larry Vickers of Vickers Tactical has a short and sweet review below followed by the ever-amped Jeff Bloovman and Steve Fisher going more in-depth for Practically Tactical.