Gun control groups promise to be in Atlanta for NRA Meeting 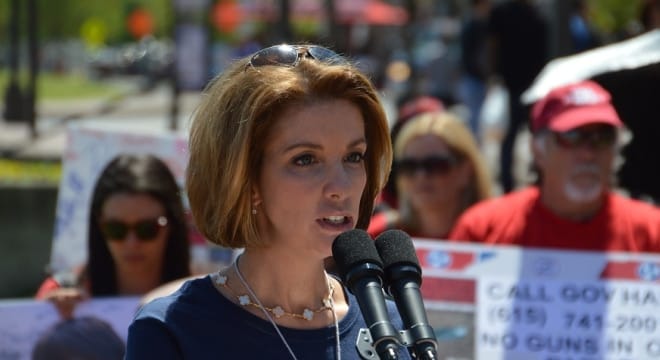 Shannon Watts, the founder of Moms Demand Action, speaks at a rally for gun control advocates during the NRA Annual Meeting in Nashville, Tenn. in 2015. (Photo: Chris Eger/Guns.com)

With news that President Trump will address the crowd at the upcoming National Rifle Association annual meeting later this month, gun control advocates confirmed Monday they will be there as well.

Trump, who addressed the Second Amendment group during his Presidential run in both 2015 and 2016, will be speaking at the meeting’s Leadership Forum for a third time in a row at the annual convention held in Atlanta at the end of the month. It will be a historic moment — the first time that a sitting chief executive appeared at the show since the 1980s. With that, members of Everytown and Moms Demand Action are planning also be in the Georgia capital to get their message across.

“Degrading our nation’s laws is a dream for NRA lobbyists and a nightmare for public safety,” Shannon Watts, founder of Moms Demand Action, said in a statement. “That’s why our volunteers will be in Atlanta during the NRA’s annual meeting, just as we have been showing up at town halls and in statehouses across the country to stand up for the safety of our families and communities. We will not be silenced. We’ve always known this is a marathon, not a sprint—but it’s a race we will win.”

Watts and members of the Bloomberg-funded Everytown group were on hand at public open-air rallies against the NRA’s annual meeting in Indianapolis in 2014 as well as the next year in Nashville, but opted to hold a more private event in Louisville last year for a special screening of Katie Couric’s “Under the Gun.” It is unclear the scale of the planned Atlanta gathering.

Sharing the stage with Trump will be at least one member of his inner circle, Secretary of the Interior Ryan Zinke, the first Navy SEAL to be confirmed to a cabinet-level position. Nevada Attorney General Adam Laxalt, who blocked a controversial ballot referendum expanding background checks on gun transfers from taking effect, is also scheduled to address the crowd.