Trump’s ‘armada’ to Korean Peninsula still thousands of miles away 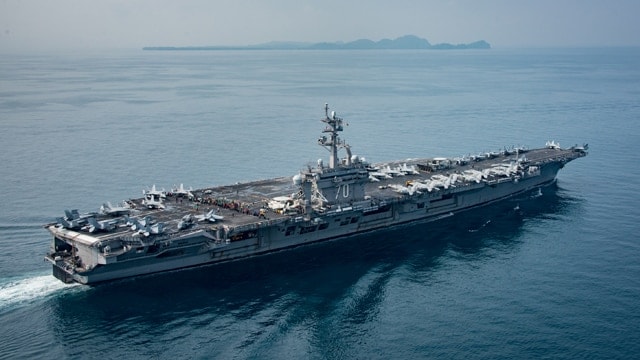 In the midst of rising tensions with North Korea, the U.S.S. Carl Vinson strike group, said to be headed for the Korean Peninsula more than a week ago, was reported Monday to be thousands of miles away.

While the U.S. media reported, and the world reacted to news that the warships were barreling towards the Sea of Japan, the ships were actually participating in training exercises with Australian forces in the Indian Ocean, according to Defense News, which broke the story.

It started on April 9, when a Navy news release announced that Adm. Harry Harris had directed the Vinson, as well as three other warships, to leave Singapore the day before. The strike group was to “operate in the Western Pacific rather than executing previously planned port visits to Australia.”

The release didn’t specify why the warships were bound for the region, but a spokesman clarified.

“The number one threat in the region continues to be North Korea due to its reckless, irresponsible and destabilizing program of missile tests and pursuit of a nuclear weapons capability,” said U.S. Pacific Command spokesman Dave Benham.

I explained to the President of China that a trade deal with the U.S. will be far better for them if they solve the North Korean problem!

North Korea is looking for trouble. If China decides to help, that would be great. If not, we will solve the problem without them! U.S.A.

“North Korea is looking for trouble,” tweeted Trump. “If China decides to help, that would be great. If not, we will solve the problem without them! U.S.A.”

Later in the day, Defense Secretary Jim Mattis confirmed the Vinson’s movement towards the Sea of Japan saying, “she’s just on her way up there because that’s where we thought it was most prudent to have her at this time.”

In a briefing at the White House, press secretary Sean Spicer told reporters the movement of the warships served as a deterrence, and gave the president “options in the region.”

“I think when you see a carrier group steaming into an area like that, the forward presence of that is clearly, through almost every instance, a huge deterrence,” he said.

Trump ramped up the rhetoric Wednesday, but not before providing insight into his military strategy in an interview with Fox Business Network’s Maria Bartiromo.

“You redirected Navy ships to go toward the Korean Peninsula,” Bartiromo said. “What are we doing right now in terms of North Korea?”

“Ya know, I don’t talk about the military. I’m not like Obama where they talk about, ‘in four months we’re raiding, we’re gonna hit Mosul.’ And in the meantime, they get ready, and…they’re still fighting. Mosul was supposed to last for a week and now they’ve been fighting it for many months, and so many people died.”

“I don’t want to talk about it,” he said. But then the president doubled down on his tweets from a day earlier.

“We are sending an armada, very powerful. We have submarines, very powerful, far more powerful than the aircraft carrier,” said Trump. “We have the best military people on Earth. And I will say this: he (Kim Jong-un) is doing the wrong thing.”

On Friday, a North Korean official called Trump’s tweets aggressive, and said “we will go to war if they choose.”

“If the U.S. comes with reckless military maneuvers, then we will confront it with the DPRK’s pre-emptive strike,” said Vice Minister Han Song Ryol, calling North Korea by its official name, the Democratic People’s Republic of Korea. “We’ve got a powerful nuclear deterrent already in our hands, and we certainly will not keep our arms crossed in the face of a U.S. pre-emptive strike.”

“Trump is always making provocations with his aggressive words,” he said. “It’s not the DPRK but the U.S. and Trump that makes trouble.”

Celebrating the 105th birthday of the country’s founder, and original supreme leader, Kim Il Sung, North Korea rolled out several never before seen weapons in a holiday show of force.

In the early morning hours of April 16, following days of rumors of just such a test, the DPRK launched a missile that “blew up almost instantly.” It wasn’t immediately clear if it was a long-range ballistic missile.

In a visit near the Demilitarized Zone, the border between North and South Korea, Pence called the missile test “a provocation” and said “the era of strategic patience is over.”

The same day, U.S. Forces joined the South Korean military to begin an annual training exercise known as Max Thunder. About 1,000 U.S. personnel will train with the the South Korean Air Force in the two week show of force.

Also on Monday, Defense News broke the story about the whereabouts of the warships, reporting on a photo posted to the Navy’s website that showed the U.S.S. Carl Vinson sailing through the Sunda Strait two days earlier, while the DPRK celebrated Kim Il Sung’s birthday in a grand display of weaponry. The Sunda Strait is more than 3,000 miles southwest of the Korean Peninsula.

Defense Department officials confirmed to the New York Times that more than a week later, the warships are finally headed to the peninsula, and are expected to arrive sometime next week.