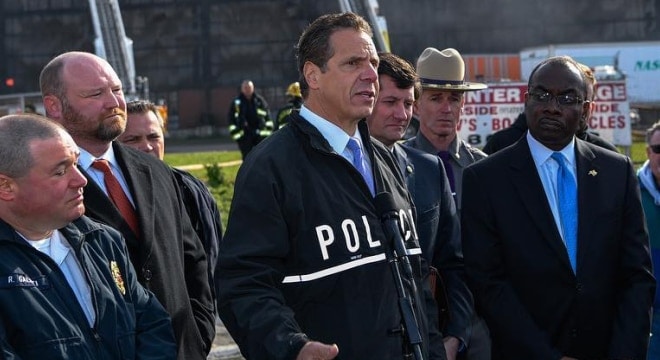 Gov. Andrew Cuomo (D) announced over $13 million in continuing funds for 17 counties in New York outside of the Big Apple to target gun violence and aggravated assaults. (Photo: governor.ny.gov)

New York Gov. Andrew Cuomo on Tuesday announced another round of gun control funding grants to agencies and departments across the state.

The grants, issued to 20 police departments in 17 counties through the Gun Involved Violence Elimination initiative, totaled some $13.3 million. The figures unveiled this week matched similar amounts announced by Cuomo in both 2016 and 2015 as the program, unique to New York, moves into its fourth year.

“This administration continues to work tirelessly to combat gun violence in our communities and help prevent the needless tragedy that comes with it,” Cuomo said in a statement. “The GIVE initiative provides law enforcement with resources and training to bolster public safety, strengthen communities that are hardest hit by crime and create a stronger, safer New York for all.”

The funds allocated in the GIVE initiative are to go towards law enforcement overtime, training, equipment and community outreach, as well as funding prosecutors, intelligence specialists and crime analysis who target illegal guns.

GIVE funding will allow agencies to further integrate what is termed “hot-spots policing” which targets areas where crime is believed more likely to occur as well as “focused deterrence,” in which authorities identify chronic offenders for enhanced attention that includes increased access to social services and street outreach workers.

The largest grant recipient by county, picking up a combined $1,837,610, is Erie County, which will be split between the Buffalo Police Department and the local district attorney’s office, sheriff’s office and probation department.

The GIVE initiative replaced a controversial decade-long police grant program, Operation Impact, which was phased out in 2013. That program took fire for flooding high-crime areas, then referred to as “impact zones” with rookie cops fresh out of the academy and was tied to a number of divisive tactics, such as stop-and-frisk policing, which were later deemed unconstitutional.

A chief metric on receiving funding through Impact was for agencies to closely report the numbers of shooting incidents, individuals “killed by gun violence” and guns recovered and traced through the Bureau of Alcohol, Tobacco, Firearms and Explosives.