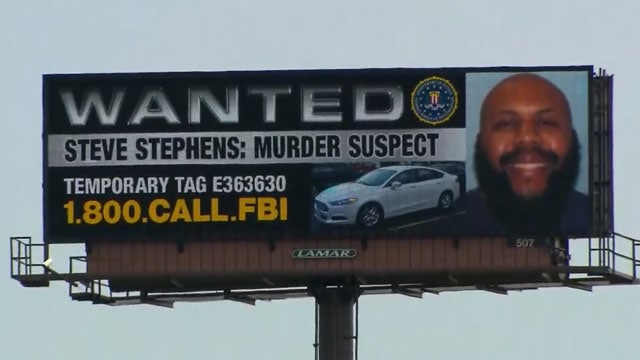 For nearly two days, residents in five states have been on alert as Steve Stephens attempted to elude authorities. (Photo: Fox)

The search for the suspect who fatally shot an elderly man in Cleveland, then posted a video to Facebook displaying the brutal crime, is over.

Steve Stephens, who has been dubbed the “Facebook killer,” died from a self-inflicted gunshot wound to the head as authorities closed in on him in Tuesday morning in Erie, the Pennsylvania State Police said in a statement.

Stephens’ suicide comes at the end of a 45-hour manhunt spanning across five states. According to local reports, while authorities previously admitted they had “no idea” where Stephens could be, he was located thanks to the help of a vigilant McDonald’s restaurant employee.

Stephens apparently visited the drive-thru near Harborcreek Township just after 11 a.m. and ordered chicken nuggets and fries. According to franchise owner Thomas DuCharme, Jr., the employee recognized Stephens as he placed his order.

DuCharme said the employee came to him and said, “‘I think that’s the guy. Can you double check I’m right?’ When I saw him, I knew it was him.”

DuCharme called the police while the employee attempted to stall Stephens, handing him his chicken nuggets but saying it would be a couple of minutes for the fries. But DuCharme said Stephens did not want to wait.

“I’ve been doing this for 34 years. [Stephens] didn’t want his money, he wanted the nuggets and to leave,” DuCharme said.

Stephens drove away without his fries, but by that time police were already en route and caught up with him about five miles from the McDonald’s. According to a statement from the state police, they attempted a PIT maneuver to disable Stephens’ vehicle, which caused it to spin out of control. Once the vehicle stopped, Stephens pulled out a pistol and shot himself in the head.

There were no injuries to law enforcement or any members of the public.