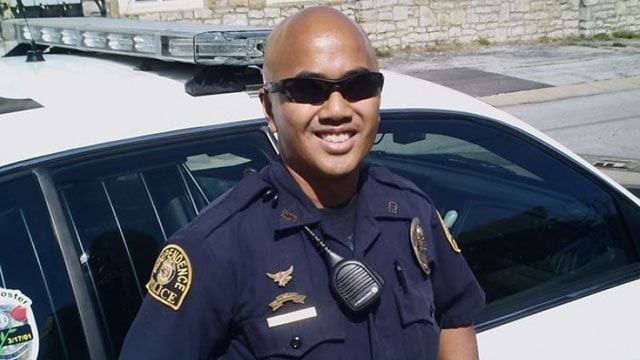 Although a long road lies ahead of him, Tom Wagstaff’s recovery thus far has been described as “truly a miracle.” (Photo: Go Fund Me)

The police officer who was shot in the head last month while responding to a burglary in progress and assault at an Independence, Missouri, home was transferred this week from the hospital to a long-term rehabilitation facility.

Tom Wagstaff, a 15-year veteran of the force, was critically injured on March 29. Independence Police Chief Brad Halsey said in a statement Tuesday they are amazed at the progress Wagstaff has made thus far, but noted he still has a long road ahead of him.

Likewise, Dr. Roger Ray, the neurosurgeon at Centerpoint Medical Center, where Wagstaff was treated, said in his more than 30 years as a physician, he has never seen “such a remarkable recovery – truly a miracle in the making.”

Hasley said that while they are confident Wagstaff will continue to amaze them with his strength and courage, they also realize there will be good days and bad days throughout the rest of his recovery.

“What will carry him through is the continued thoughts and prayers from all of us, and the amazing bond that guides us through all of life’s difficult times,” Halsey added.

Halsey said in the 24 years he has been with the department, he has never doubted the community’s support of their first responders, but over the last month, he has been overwhelmingly reaffirmed of the unwavering support not only from Independence but the entire Kansas City area.

Wagstaff was one of several officers who responded to the call about the burglary, in which the 82-year-old homeowner was also being assaulted. As officers neared the scene, the four suspects stole the homeowner’s SUV and, as they were fleeing the scene, opened fire, striking Wagstaff, 42, in the head. The suspects led authorities on a brief pursuit but were eventually apprehended.

The suspects were identified as Joseph E. Wyatt, 28; Ronar Santiago-Torres, 27; James McChan, 56; and Donald Nussbaum, 51. They all face charges of first-degree robbery, armed criminal action, first-degree burglary, and kidnapping, but McChan and Nussbaum are charged as accomplices.