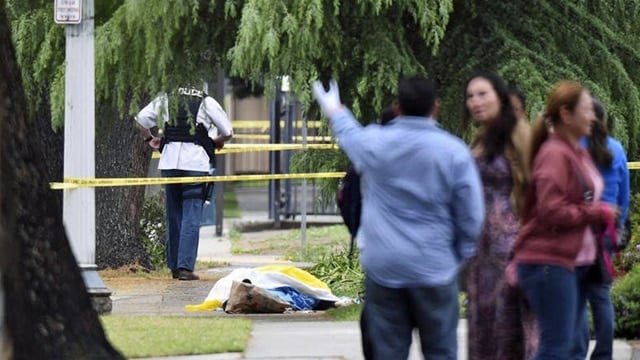 Police in California say, despite what the suspect said during his arrest, a deadly rampage that resulted in the death of three white men Tuesday morning was motivated by race, not terrorism.

Kori Ali Muhammad, 39, was arrested in Fresno shortly after firing 16 shots and killing three white men with a .357 at four different places in less than two minutes, authorities said. According to the Los Angeles Times, Muhammad was the suspect in the fatal shooting of a security guard at a Motel 6 last Thursday.

“Suspect Muhammad shot and killed a 25-year-old security guard by the name of Carl Williams, and he also attempted to shoot a second security guard but ran out of ammunition prior to being able to do so,” said Fresno Police Chief Jerry Dyer at a press conference Tuesday.

“We know that he became aware of the fact that the Fresno Police Department was looking for him for murder,” Dyer said. “As a result, he made a decision to himself that he was not going to go to jail for shooting a security guard, that he was going to kill as many people as he could today, and that’s what he set out to do.”

Muhammad was arrested without incident. As he sat in the backseat of the patrol car, he yelled out ‘Allahu akbar,’ a phrase meaning “God is great.” It’s often used by Muslims in prayer, but has been co-opted by terror groups, sometimes being shouted during violent acts, or showing up in tweets from ISIS. Dwyer said that moment “obviously prompted some concerns in terms of what his motive may have been,” but said the investigation showed Muhammad’s alleged actions were “solely based on race.”

Muhammad, who changed his name from Kori Taylor as a teen, talked a lot about black pride and black nationalism on his Facebook page. In a rap video posted to YouTube last month, he talked about violence against white people.

“On a mission for the liberation of my people,” he rapped. “Been at it since ’95, hear me people? Demanding justice for the murders of my black kin. Hollow points make a white devil body spin.”

In 2005, Muhammad was indicted and faced a slew of gun and drug charges, and was initially deemed mentally unfit to stand trial.

“Kori Ali Muhammad is presently suffering from a mental disease or defect rendering him mentally incompetent to the extent that he is unable to understand the nature and consequences of the proceedings against him or to assist properly in his defense,” wrote U.S. Dis­trict Court Judge Oliv­er W. Wang­er in October 2005.

About a year later, he was deemed competent and served 92 months in federal prison. He’s expected to face four counts of murder for Tuesday’s rampage, and two counts of assault with a deadly weapon.