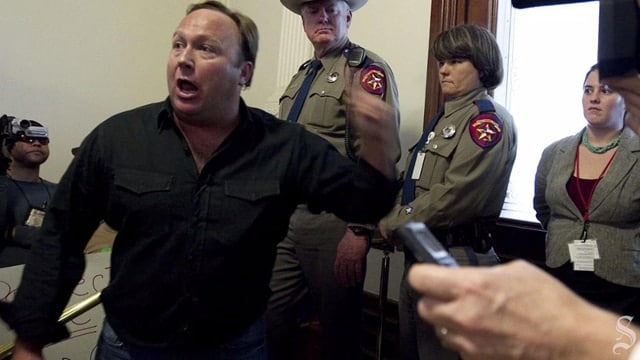 Alex Jones was described by his attorney as a “performance artist” when he pushes provocative conspiracy theories aimed at undermining tragedies like the Sandy Hook school shooting.

Attorney Randall Wilhite told a state district judge that his client, Jones, should not be judged by his on-air Infowars persona during a pre-trial conference last week, the Austin American-Statesman reported.

“He’s playing a character,” Wilhite said of Jones. “He is a performance artist.”

Jones’ ex-wife, Kelly Jones, is seeking to gain sole or joint custody of their three children. At the hearing, she portrayed the volatile public figure as the real Alex Jones.

In the wake of the Sandy Hook shooting, in which 20 first-graders and six educators were murdered by a 20-year-old gunman in Newtown, Connecticut, Jones called the incident “completely fake.” His website has also nurtured the idea that the tragedy, and others like it, were staged with actors posing as victims.

Jones and his wife divorced in 2015, but a trial for the custody dispute will take place over the next two weeks.