Car thief held at gunpoint after crashing into California home 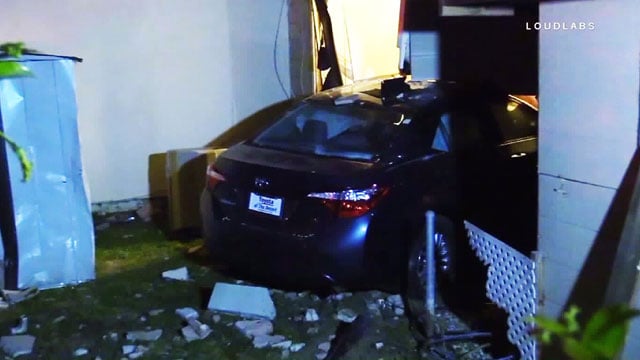 A homeowner in Fountain Valley, California, held a suspect at gunpoint after he crashed into the man’s house in a stolen car last week.

Maradiaga said there were four people in the car. Two initially fled, while two others tried to enter Maradiaga’s home. Maradiaga’s wife ran to check on their baby and Maradiaga grabbed a gun and held one of the suspects at gunpoint until police arrived, which was only about a minute later.

In fact, the crash happened after police attempted to pull over the car for a minor traffic infraction, but instead of stopping, the driver led police on a brief pursuit.

Authorities later learned the vehicle was stolen out of Anaheim and also discovered cocaine and methamphetamine in the car.

With the help of a K-9 unit, all four suspects were taken into custody shortly after the crash. They were identified as Tanisha Marie Estrada, 29; Leticia Dominguez, 21; Daniel Enrique Ramirez, 23; and Joshua Rudy Ramirez, 20.