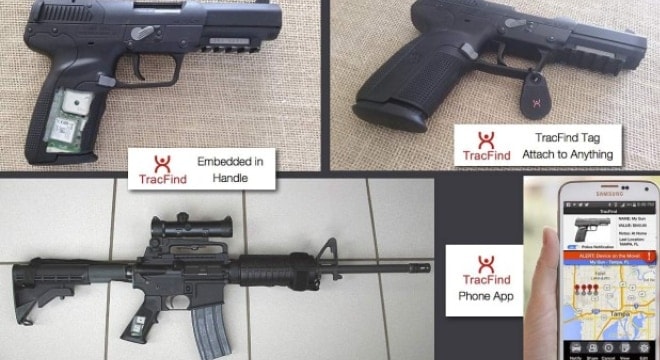 The use of GPS firearms tracking devices such as TracFind cannot be mandated for gun owners in Arizona under a law signed this week. (Photo: TBO.com)

The bill, HB 2216, curtails future mandates that would add technology designed to locate or control guns in the state. It passed the Senate 17-12 earlier this month and the House 34-24 this week before Ducey signed it without comment.

Backers argue that, while there may be a need to utilize such technology in investigations or by gun dealers for inventory control, gun owners shouldn’t’ be forced into using trackable smart guns.

“This really is pretty simple, it just says that it cannot be a requirement to either purchase or to have a gun,” said the bill’s sponsor, Rep. Paul Boyer, R-Glendale, in Senate hearings. “Law enforcement needs it when they need it, there is no reason why a private citizen should have this imposed on them as well.”

The language of the measure states that requiring a person to use any sort of electronic firearms tracking technology is unlawful and forcing one to do so without their voluntary consent in writing is a class six felony under Arizona law. Supporters argued that current smart guns use RFID technology that can control or lockout guns equipped with it and other designs utilize mapping and GPS tracking technology, logging information about a firearm’s use or location.

The bill allows that law enforcement can use tracking technology under a warrant, as can parole or probation officers for surveillance, or pawnbrokers for tracking inventory in conjunction with a sheriff. Also, it does not block the voluntary use of the technology by any gun owner.

The act also clarifies that a law enforcement database established to catalog lost or stolen firearms is not considered electronic firearm tracking technology under the new law.

The measure had the support of gun rights groups such as the Arizona Citizens Defense League and National Rifle Association, who argued it was needed to address privacy concerns.