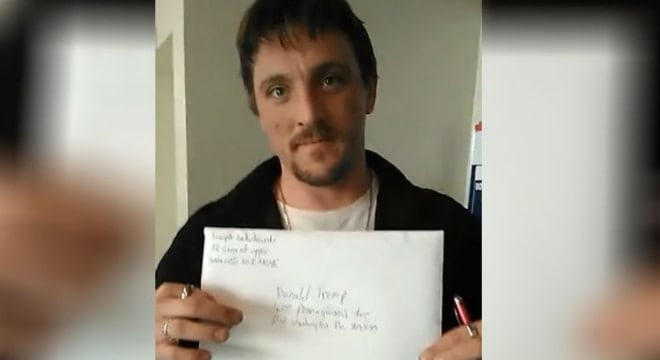 Jakubowski, who sent a complex grievance to the president, is facing multiple weapons charges (Photo: Fox6)

A federal grand jury in Wisconsin, sitting in Madison, on Wednesday returned indictments on a man who broke into an area gun store and sent a rambling manifesto to the White House.

Charged with stealing 18 firearms and two silencers from Armageddon Supplies on April 4, as well as being a felon in possession of firearms and silencers after that date was Joseph Jakubowski, 32, of Janesville.

As previously reported by Guns.com, Jakubowski mailed a 160-page anti-government manifesto to President Trump expressing grievances with the government, as well as anti-religion sentiments at the time of the burglary, then burned his truck and disappeared.

While on the run, a task force of more than 150 personnel from multiple local, state, and federal law enforcement agencies was formed to search for Jakubowski, issuing first a $10,000 then a $20,000 reward. He was captured after a 10-day manhunt at a campsite in rural southwestern Wisconsin with five guns, a samurai sword, and a copy of his manifesto.

“We are fortunate that whatever his endgame was, he was not able to complete it,” Spoden said.

Jakubowski made his initial appearance in federal court last week and will remain in federal custody pending arraignment, which is scheduled for April 25. He faces 10 years in federal prison on each count if convicted.