'Mother of all marches' turns deadly in Venezuela, as Maduro arms militia 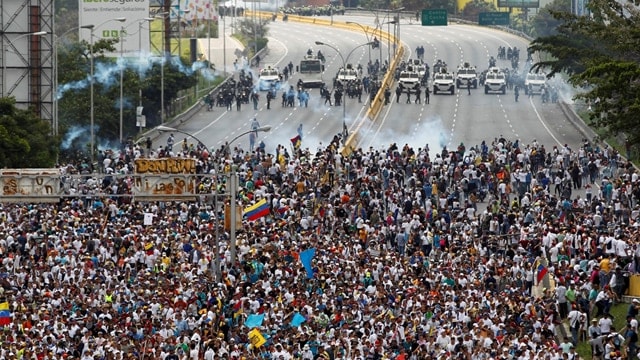 At least two people were killed in Venezuela on Wednesday, as demonstrations against President Nicolas Maduro’s government stretched into a fourth week.

In what’s been dubbed the “mother of all marches,” hundreds of thousands of people protested in 12 cities to mark the country’s 207th anniversary of its independence from Spain. A teenager was killed at a protest in Caracas, and hours later a woman was shot and killed in San Cristobal, just days after Maduro announced he’d give guns to half a million civilian militia members, according to Bloomberg.

Seven people have died at protests in Venezuela this month, with dozens more injured and at least 30 arrests. Demonstrations have ramped up since a Supreme Court decision last month saw the court take power from Parliament. The court reversed course a few days later, but the damage was already done.

Venezuela is in the midst of an economic collapse, with the inflation rate reaching 800 percent in January. The IMF estimates that unemployment in the country is near 25 percent. A lack of food and medicine has led to deaths, and protests have flared up and dissipated over several months.

Still, thousands rallied in support of Maduro in Caracas, with estimates of the total number of people protesting in the nation’s capital topping out at as much as 1.2 million over a 12 mile stretch.