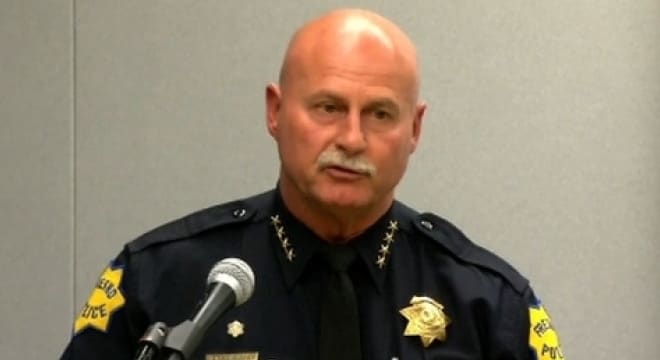 Fresno Police Chief Jerry Dyer on Wednesday implored the man thought to have picked up the murder weapon to turn himself in. (Photo: AP)

The gun used to kill three in a racist shooting in California this week has not been recovered and authorities are now seeking a man believed to have picked it up near the crime scene.

While Kori Ali Muhammad, 39, was arrested in Fresno on Tuesday after firing 16 shots and killing three white men, the .357 Magnum revolver thought to have been used in the fatal shootings is now the focus of its own search.

“I’m asking this individual, a Hispanic male, who picked up that firearm, that ultimately took it to 161 North Yosemite and unloaded the empty shell casings, to turn themselves in immediately,” said Fresno Police Chief Jerry Dyer at a press conference Wednesday.

Dyer said they have several pointers as to who the suspect is, including a box of food the man left behind, but would rather he come forward.

“We have video evidence, which we will be analyzing to get a detailed description of who this individual is. We are also processing the box of food as well as the items contained within that box to learn of his identity,” Dyer said. “It would be much better for him to turn himself into the Fresno Police Department.”

Killed on Tuesday along N. Fulton Street in Fresno were Zackary David Randalls, 34, of Clovis, Mark James Gassett, 37, of Fresno and David Martin Jackson, 58, of Fresno.

Muhammad, born Cory Allen Taylor, had a criminal history that dated to 1997 and court documents also indicated that he had been determined in 2005 to suffer from a mental disease rendering him incapable of standing trial in a felony case.