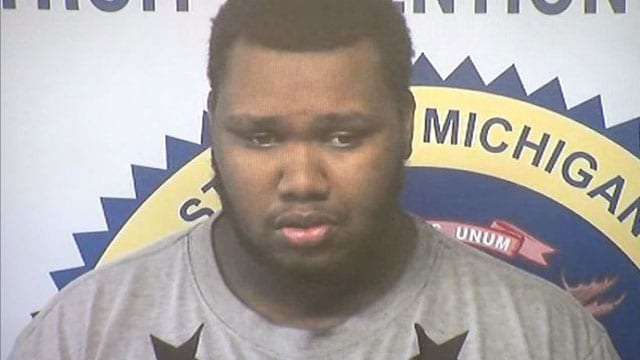 Juwan Plummer, 19, was visibly upset as his charges were read aloud in court Wednesday. (Photo: Fox 2)

A 19-year-old man is facing multiple charges following a late-night incident Sunday in which he shot two Detroit police officers who, at the time, he thought were burglars.

The incident unfolded around 11:45 p.m. Sunday. In the three days leading up to the shooting, there had been a number of break-ins in the area and Plummer’s family said they were all shaken up and on edge.

Several hours before the shooting, someone from Plummer’s home called the police about a burglary at the house across the street. As the officers returned to Plummer’s home later that night, presumably to speak with someone in the house about the earlier incident, another call was placed to 911, with the caller saying someone was outside with a flashlight. The flashlights, as it turned out, belonged to the police officers.

As the officers stood on the front porch, Plummer apparently fired a single shot from a shotgun through a window. One officer was struck in the face with shotgun pellets and the second was hit in the arm with shrapnel.

The officer with the injury to his arm was treated and released, but the officer who was struck in the face suffered more serious injuries.

In a press conference Tuesday, Detroit Police Chief James Craig confirmed that the officer is still in the hospital but is improving and “in great spirits.” He said the officer is alert, talking, and laughing while surrounded by family and fellow members of the force.

Craig also confirmed that both bullets have been removed from the officer’s face but he still has one upcoming surgery. A full recovery is expected.

Craig previously said he believed Plummer fired as he feared for the safety of himself and his family, who was home with him at the time of the incident.

“He was just the man of the house trying to do the right thing, concerned, worried about his mother and his brother,” Redd told Fox 2 as he attempted to hold back tears. “He wasn’t trying to hurt anybody. He just wanted to scare him off.”

Nonetheless, Assistant Wayne County Prosecutor Molly Kettler called Plummer’s actions “extremely reckless,” noting that he failed to look out the window before he fired. Kettler added that the officers arrived at the home in a marked patrol car, were dressed in full uniform, and knocked on the door and announced their presence.

“This case is very unfortunate and could have been much worse. We simply cannot and will not ignore the alleged actions of the defendant in this case. The victims could well have been a neighbor, or a small child,” Wayne County Prosecutor Kym Worthy said in a statement. “The lives of these officers, who were doing their jobs, will never be the same and we must hold people accountable for their actions.”

Plummer, who was visibly distraught as the charges were read aloud, pleaded not guilty. His bond was set at $25,000. Prosecutors requested Plummer, who has no prior criminal history, be given house arrest or an electronic ankle monitor, if released on bond, but the request was denied. He is due back in court April 26.