Remington asks for extension to respond to Sandy Hook appeal 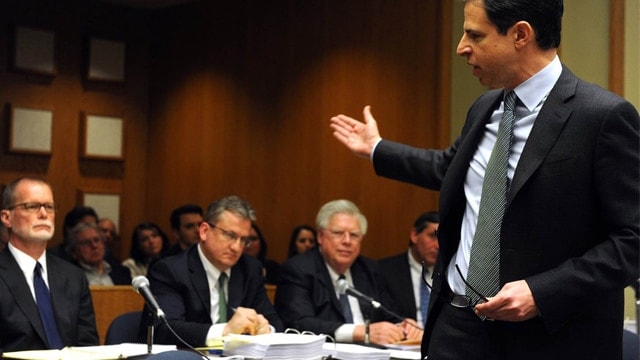 An attorney representing families of Sandy Hook victims addressing attorneys for Remington and other defendants during a hearing in a Connecticut courthouse. (Photo: The Associated Press)

Attorneys representing Remington Outdoor Company and four other defendants have asked for an extension to respond to an appeal by families of Sandy Hook shooting victims.

According to the motion filed Wednesday, the deadline for defendants to submit a response is May 1, but they’re still waiting for at least four more briefs, which are also due right before or on May 1.

The families asked the court to reinstate their case at the beginning of March, when they filed a brief narrowing the interpretation of consumer laws used to argue negligent entrustment.

While most of the organizations have until May 1 to file, one group, the Trinity Church Wall Street, which was the first to file a request and have it approved, has already submitted a brief.

Trinity argued that the state recognizes the dangers of AR-style firearms, which is why lawmakers passed an assault weapons ban following the Sandy Hook shooting.

The church described an AR-15 rifle, like the one used in the massacre, as “a special risk item” because of its “muzzle velocity that not only allows bullets to penetrate residential walls and doors, but also body armor and steel helmets, and can inflict catastrophic damage including amputation and decapitation.”

In last year’s dismissal, the court said Remington was protected under the broad immunities provided by the federal Protection in Lawful Commerce in Arms Act since it was criminal misuse that caused deaths and injuries on that fateful day.

Yet, legal strategists said the court left room for an appeal since PLCAA doesn’t apply if the gun sale violated a state law like the one cited in the case. Plaintiffs claimed selling the gun to the gunman’s mother violated a Connecticut consumer protection law that regulates deceptive advertising.

According to the case docket, plaintiffs get a month to respond after the defendants file their response, but the state Supreme Court isn’t expected to take up the case until the fall.