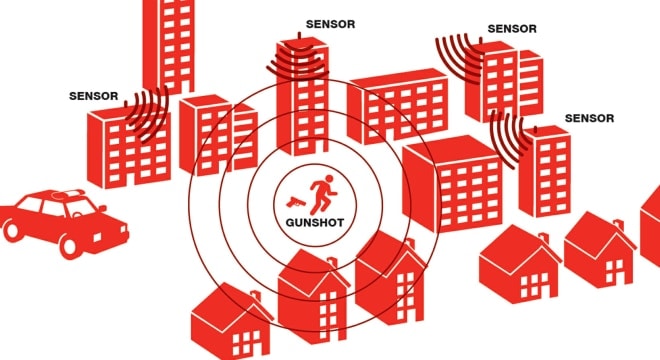 Shot Spotter helps pinpoint the location of gunshots through a series of acoustic sensors on buildings and lampposts, relaying information to officers in near real time. (Graphic: Shot Spotter)

Authorities in California on Wednesday credited a gunfire detection system with the speedy capture of a suspect in a triple murder.

“He was in custody within 4 minutes and 13 seconds,” Dyer said. “Kori Muhammad would be outstanding today if it wasn’t for shots-fired detection.”

The system, called Shot Spotter, reportedly captured 16 shots in under two minutes and was able to track the shooter as they moved. The information, which is delayed less than 30 seconds from the time the shots are fired until an alert registers with the monitoring agency, was forwarded to officers in the field in near real time.

Fresno got the go-ahead to begin installing Shot Spotter in 2014 with three test sites, later expanded to cover larger parts of the city using a $150,000 grant and $500,000 from the local school district who also allowed schools to act as detection centers.

Shot Spotter says their system is in use around the world and in 2015 detected 165,531 gunshots in 54,699 incidents across 62 cities with peaks due to celebratory gunfire during holiday periods and sporting events.

However, some cities have reported mixed results from the use of the system, with Charlotte, North Carolina electing to end its $160,000-per-year contract with Shot Spotter and Richmond, Virginia last month moving to invest in police body cameras instead.

Muhammad, born Cory Allen Taylor, had a criminal history that dated to 1997 and court documents also indicated that he had been determined in 2005 to suffer from a mental disease rendering him incapable of standing trial in a felony case.