The Nuge, Kid Rock and Sarah Palin dine with Trump at White House 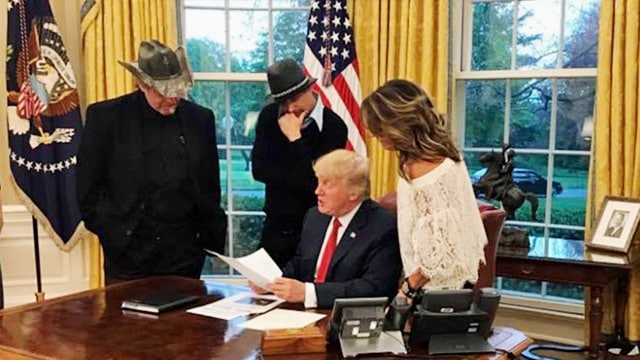 Uncle Ted made the visit with fellow rocker Kid Rock, and former Alaska governor and Republican vice president candidate Sarah Palin, who posted photos of the evening to her Facebook page.

“President Donald Trump has long expressed his support of hunting, wildlife conservation and gun rights in America,” said Nugent in a blog post Thursday. “Last night, he took some time out to meet and have dinner with Deer & Deer Hunting’s most popular blogger,” he said, referring to himself.

“The WhackMaster was there all aglow with truth, logic and commonsense oozing from every pore.”

Nugent, who campaigned for Trump, said the “prognosis for hunter’s rights has never been better” than under Trump. 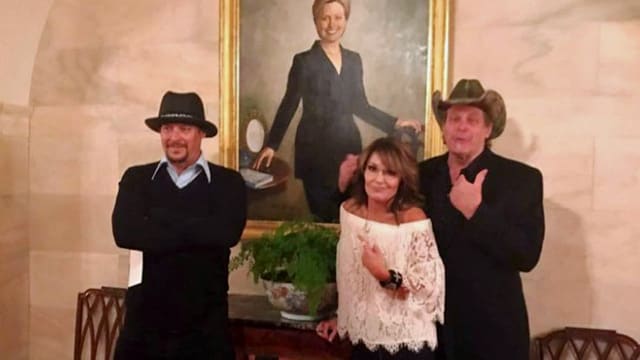 The trio pose mockingly in front of a portrait of former first lady and Secretary of state Hillary Clinton. (Photo: Sarah Palin)

“Yanking the status quo noose from our collective necks may very well be the coolest thing Americans have ever done this side of meeting the Red Coats at the Old North Bridge in Concord and blowing their brains out when they dared to come take our guns,” he said, noting that his meeting with POTUS coincided with the 242nd anniversary of the shot heard round the world, which launched the American Revolutionary War.

“We discussed various quality of life issues and how entrenched status quo political correctness has wrecked everything it has touched and how his administration is focused and dedicated to get back to the US Constitutional basics of government of, by and for the people,” Nugent said.

The “Cat Scratch Fever” rocker, who has referred to former President Barack Obama as a “Chicago communist-raised, communist-educated, communist-nurtured subhuman mongrel” and Hillary Clinton as the “devilbitch,” posed with Palin and Kid Rock in front of a portrait of Clinton in the White House basement.

“All in all, Shemane and I were genuinely honored to break bread with the leader of the free world, and for the first time in many years I have a renewed level of positive excitement about the improved direction our country is now headed,” Nugent said.