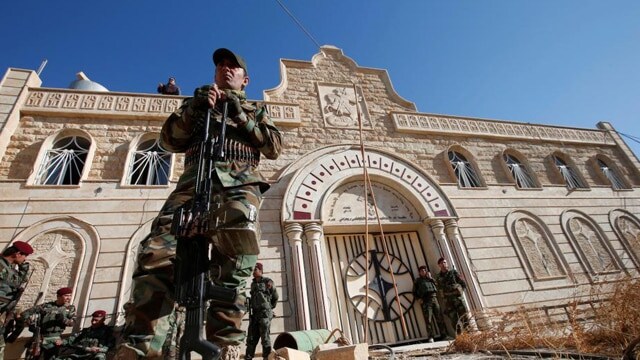 Peshmerga fighters guard a church in November 2016 as a new cross is erected to replace one destroyed by ISIS fighters. (Photo: Azad Lashkari/Reuters)

The State Department approved a $295.6 million sale of machine guns, mortar systems, trucks, and other military equipment to Iraq on Wednesday.

The Iraqi government requested the sale of the equipment, which will be used to outfit two Peshmerga infantry brigades and two support artillery battalions, according to a news release by the Defense Security Cooperation Agency, an arm of the Department of Defense.

Peshmerga roughly translates to “those who face death.” Based in the autonomous northern region of Iraqi Kurdistan, the group has proven to be a valuable asset in the fight against ISIS in recent years. Peshmerga fighters have also made news for their role in the toppling of Saddam Hussein’s regime, as well as the elite female units that helped that effort, and continue to help fight ISIS today.

“These artillery battalions and infantry brigades will operate under the Kurdistan Regional Governments Ministry of Peshmerga (KRG MOP) with the concurrence of the central government,” the DSCA says.

Foreign Military Sales like this one happen when the U.S. government sells military equipment to “allied and friendly nations to assist them in meeting their legitimate defense requirements,” according to the State Department website. The Defense Department implements the sales through the DSCA, but the Department of State has to first review and approve the transactions.

The sale’s approval does not mean it’s gone through. Contractors involved in the potential sale include AM General, Oshkosh Defense, Navistar Defense, Harris Radio, and Colt Corporation.

Congress was notified of the approval this week.