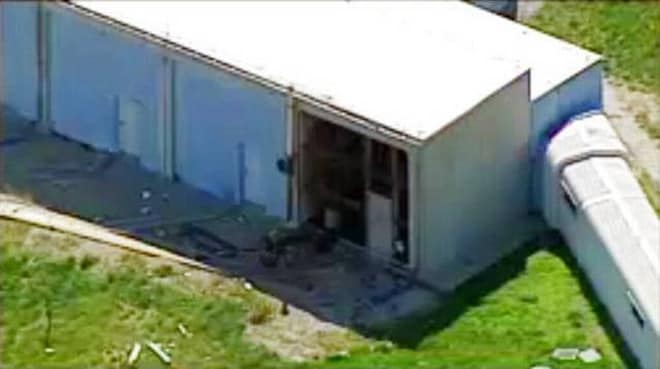 The explosion caused damage to the side of a building at the Lake City Army Ammunition Plant in Independence, Missouri on April 11. (Photo: KCTV5)

Federal investigators determined the explosion at a Missouri ammunition plant that left one person dead and four injured was not criminal in nature.

Yet, ATF and Army investigators are still reviewing the exact cause of the explosion at Lake City Army Ammunition Plant in Independence, Missouri.

The plant, operated by defense contractor Orbital ATK and services all branches of the military, suffered an explosion in the primer mixing area on April 11 at around 1 pm, authorities said.

The explosion did significant damage to the primer production area, according to a statement by the facility. The incident resulted in four people injured and one killed.

The base held a memorial service for Lawrence Bass, 55. Facility and company executives attended the memorial, honoring his 36 years working at the plant.

“While LB may not have worn this uniform, his dedication and selfless service is beyond question,” said Lt. Col. Eric Dennis, commander of the Lake City plant, in a statement. “To me, my staff, and the entire military, LB died a hero, serving his country. And we will not forget,”

Bass’s family asked for privacy during their time of grievance, but did release a statement to local media: “We are devastated, in disbelief and heartbroken for the loss of a son, brother, father and grandfather. We are thankful for the many prayers and ask for the respect of the media during this time.”

While it’s unclear the estimated cost of the damage, the Lake City plant reopened on April 14.

The Lake City plant produces small-caliber munitions and operates the NATO test center. It staffs 29 Army civilians and one solder. The facility as a whole houses 3,935 acres with 408 buildings, 43 magazines, nine warehouses, 11 igloos and storage capacity of 707,000 square feet.