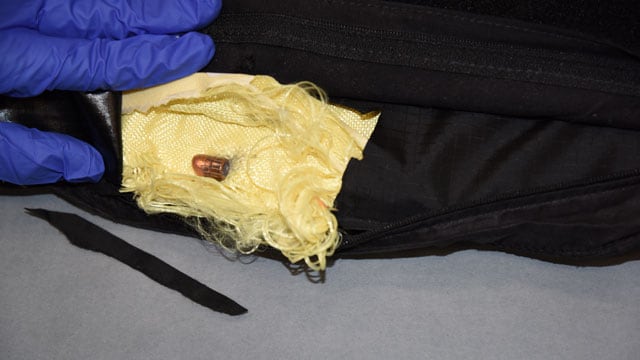 One of the bullets fired in the exchange was stopped by the officer’s bulletproof vest. (Photo: Seattle Police Department)

An armed robbery at a Seattle convenience store Thursday afternoon ended in an exchange of gunfire between responding officers and one of the suspects.

The Seattle Police Department confirmed in a statement that three officers were struck by gunfire, one suspect was killed, and two additional suspects are in police custody.

Authorities say a call came in at 1:18 p.m. about a robbery. The caller gave a description of the suspects, who fled after the robbery and police responded within minutes.

Almost immediately, the suspects were located, but refused to comply with commands to stop. Two of the suspects were able to get away, while a struggle ensued between the third suspect and responding officers. During the tussle, the suspect struck one of the officers over the head with a bottle, then fled on foot toward a nearby office building.

Several more officers responded to the call and followed the suspect into the building. There, an exchange of gunfire occurred and three officers were struck. After the shooting, authorities immediately pulled the injured officers to safety and they were rushed to the hospital for medical treatment.

Officers then set up a perimeter and told occupants in the building to shelter in place, while the immediate area was cleared of pedestrians and motorists. SWAT then entered the building and found the suspect, who was dead.

Near the building, police found the second suspect and the third suspect was also apprehended several hours later.

The deceased suspect was later identified as 19-year-old Damarius Butts. The jailed suspects were determined to a Butts’ 17-year-old sister and another 19-year-old male.

Butts’ death was ruled a homicide and according to the coroner, he was shot multiple times. The officers who fired the shots are on administrative leave, as is typical protocol in most departments for officer-involved shootings. However, an investigation into the shooting is underway.

The injured officers, although their conditions have improved, remain hospitalized, although the extent of their injuries is not known at this time. The hospitalized officers were identified as Elizabeth Kennedy, Hudson Kang and Chris Myers. Another officer sustained a hand injury during the incident. He was treated at the hospital and released. The officer who was struck in the head with the bottle was treated on the scene.