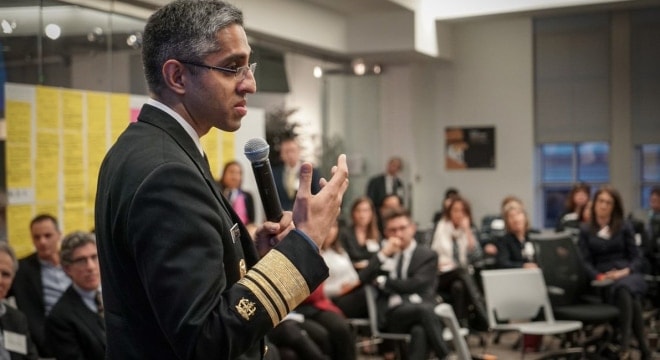 The White House on Friday relieved the nation’s top doctor, known for his controversial statements on addressing gun violence as a public health issue.

“Today, Dr. Murthy, the leader of the U.S. Public Health Service Commissioned Corps, was asked to resign from his duties as Surgeon General after assisting in a smooth transition into the new Trump Administration,” said the U.S. Department of Health and Human Services in a statement. “Dr. Murthy has been relieved of his duties as Surgeon General and will continue to serve as a member of the Commissioned Corps.”

A former Brigham and Women’s Hospital physician, Murthy was sworn in two years ago as a vice admiral and 19th Surgeon General, to the delight of gun control advocates. He came to the post of “America’s Doctor” following a narrow 51-43 vote of confirmation from a Democrat-controlled U.S. Senate. President Obama nominated the 37-year-old physician for the post in 2013, but his confirmation ran into fierce opposition from Second Amendment advocates over statements he had made in support of gun control as a health care issue.

In a statement issued Friday, Murthy explained why he chose to be relieved rather than resign with two years left in his appointment.

“My reason was simple: because I would never willfully abandon my commitment to my Commissioned Corps officers, to the American people, and to all who have stood with me to build a healthier and more compassionate America,” said Murthy. “While that decision to stand on principle resulted in my termination prior to the end of my four-year term, I know that the Office of the Surgeon General is greater than any one person and its mission must continue.”

Rear Adm. Sylvia Trent-Adams, who joined the USPHS in 1992, assumed the post of Acting Surgeon General with Murthy remarking that the career nurse is “the right person to step into this role.”