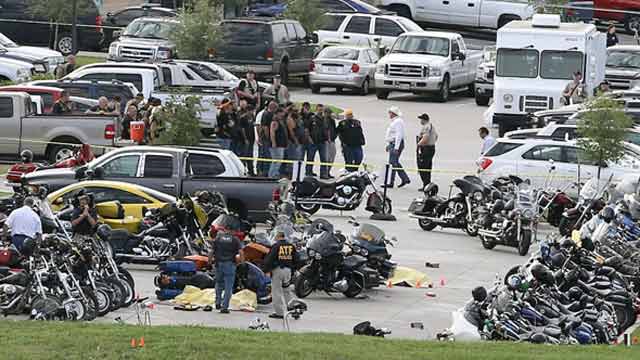 A large portion of the expenses came from jailing the 177 people originally arrested. (Photo: AP)

The costs McLennan County has incurred since the May 2015 shootout involving rival biker gangs and multiple law enforcement agencies in the parking lot of a Waco Twin Peaks restaurant has already topped more than $700,000, and there appears to be no foreseeable end in sight to the ever-growing list of expenses.

According to reports from the Waco Tribune-Herald, McLennan County has already paid out $208,239 and received $268,527 from the state, as well as a $248,941 grant from the Justice Department – all for expenses related to the case.

County payouts have gone to expenses that included fees paid to court-appointed attorneys for some of the more than 150 bikers facing charges related to the brawl.

Currently, there are about 70 court-appointed defense attorneys, all earning $75 to $80 per hour, in addition to a $50 per hour rate for travel time, as well as mileage compensation.

And with such a large case, comes a large amount of work. In fact, defense attorney Millie Thompson told the Tribune-Herald that, so far, she’s been given just under 873,000 pages of documents to review.

“So, if that is the last one, that would be the number of pages to date,” Thompson said. “And I think I did the math, that if you took 30 seconds to a minute to go through each page, that could take 300 days.”

Thompson called the amount of evidence and information “staggering,” but noted they are bound by duty to review it all.

In addition, the county has had to pay lawyers’ fees for two county officials who were named in pending lawsuits, also related to the case. To date, a dozen federal lawsuits have been filed by individuals who, among other complaints, claim they were arrested without reason or due cause after the shooting. More lawsuits are expected.

However, the majority of the money the county received from the state went to the Jack Harwell Detention Center to pay for housing the 177 bikers originally arrested. That bill was more than $190,000. The state also reimbursed the county $24,500 for the costs of transporting and performing autopsies on the nine bikers who died in the shootout.

Most of the nearly $250,000 granted by the Justice Department was given to the City of Waco to pay overtime to the officers who were present during the incident.

Nearly two years after the shooting, none of the 155 bikers who were indicted have gone to trial. The first trials were previously set to begin this month. However, they were postponed when defense attorneys asked for an extension after they received a massive amount of additional evidence just weeks before the first trials. Currently, the trials are scheduled for August.