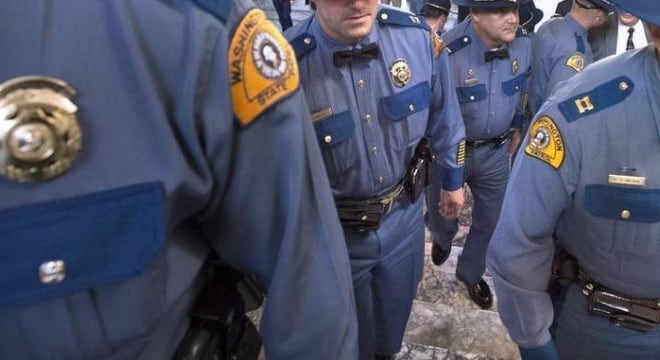 State police in Washington would have to be alerted by gun dealers within two days of a NICS denial if a pending bill is signed into law. (Photo: Tony Overman/The Olympian)

Lawmakers sent Washington Gov. Jay Inslee a measure last week that would require licensed gun dealers to contact state police in the event of a denial on a background check for a gun transfer.

The proposal, HB 1501, passed the Republican-controlled Senate unanimously on Thursday and won House concurrence 83-13 on Friday, sending the bill to Inslee’s desk.

Gun control advocates who supported the legislation welcomed the news.

“We are thrilled that the state Senate did the right thing by holding a vote on the Law Enforcement and Victim Safety bill, passing this meaningful legislation that will help save the lives of women and children here in Washington,” said Renée Hopkins, CEO of the Alliance for Gun Responsibility. The group contends there are 3,000 illegal attempts to buy a gun in the state every year.

The language of the proposal wound mandate gun dealers who encounter a National Instant Criminal Background Check System denial through the Federal Bureau of Investigation on a transfer application notify the Washington State Patrol within two business days. The agency, which would establish a new database for the denials, would itself make the information available to Washington sheriffs and police chiefs within two days. Those with active protection, harassment or restraining orders would also be notified if the subject of the order has been denied the purchase of a firearm.

A fiscal note prepared by the Washington Office of Financial Management found the measure, which provides no funding for investigations, would require $1.5 million a year in new expenditures to implement the database and notifications.

Those opposed to the measure argued a number of people are erroneously denied a purchase of a firearm through NICS checks and clearing up such an error can take months, or in some cases even years.

Inslee, a Democrat, is expected to sign HB 1501 into law.

In neighboring Oregon, directives have been pushed by the state’s governors ordering that in the event of a denial by the state’s Firearm Instant Check System, state troopers are dispatched from patrol to the dealer’s location to investigate.