Why are more consumers throwing down serious coin for high-end, laser gear? 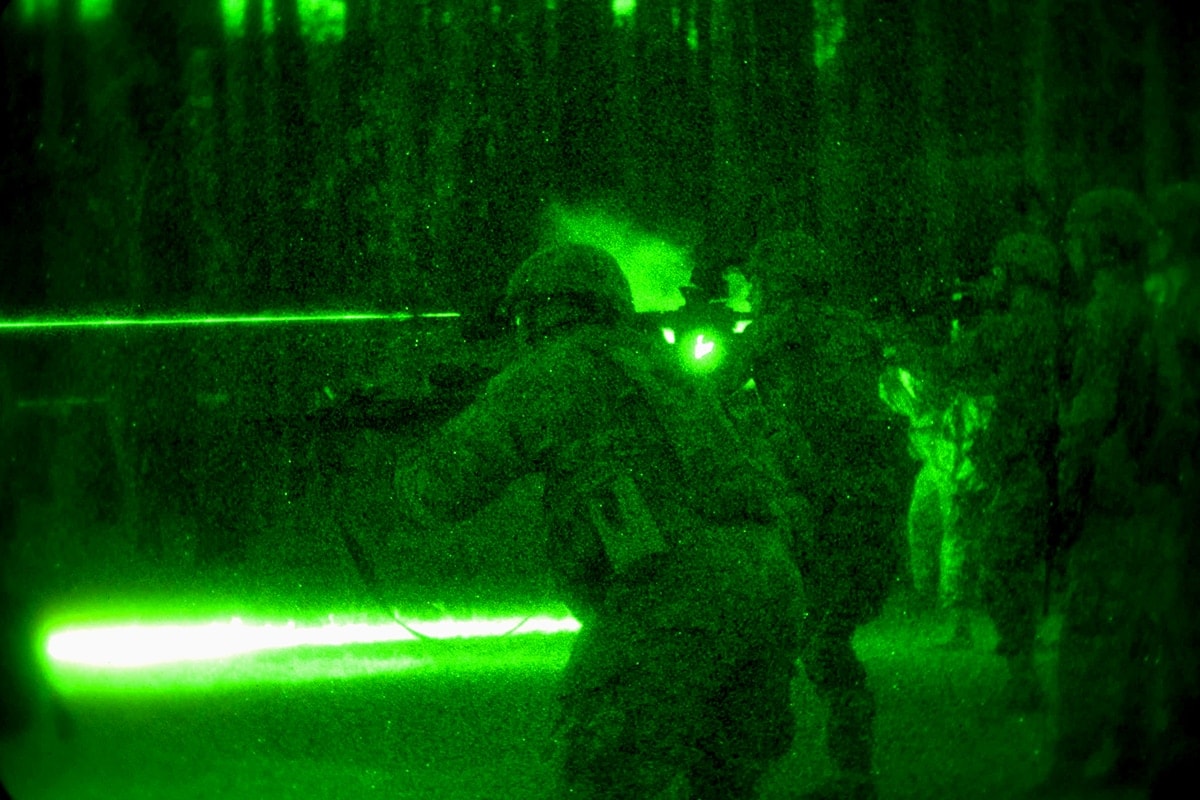 A new trend in the black rifle gear market is emerging — an intersection of high-quality and high-priced laser gear aimed at the civilian market. Once reserved for soldiers on the battlefield, laser infrared gear is now migrating over to the civilian sector, picking up dedicated consumers along the way. This ain’t your momma’s gear, though.

Priced over a $1,000 and in some cases $2,000, this new genre of laser gear requires a serious financial commitment. So, why are regular, every-day shooters tossing around thousands of dollars to equip their black rifles with the latest and greatest in laser technology? Well, the technology itself has played a massive role in bringing military-grade gear to the civilian level.

The laser industry is a highly regulated one, with the Federal Drug Administration maintaining strict requirements for commercially sold lasers. The administration demands that civilian lasers meet certain criteria that sets exposure and eye safety limits. Previously, these regulations limited the types of commercially available units, relegating them to underpowered and underwhelming devices, however, the tides have turned. As technology improved so did the means of production. The result of which created commercial grade lasers that are as good as their military and law enforcement counterparts.

“Twenty years ago what the military had was going to be the most up-to-date, current stuff and everybody hoped that one day it would flow down to the civilian market,” president of B.E. Meyers & Co., Matt Meyers, told Guns.com. “Now with tactics and technology a lot of the stuff that is coming out commercially is as good if not better.”

Meyers’ company recently took the commercial plunge, diving into the civilian market with the release of its MAWL C1+. The original MAWL was developed for military applications and with the military customer in mind, however, after the original MAWL’s DoD success, Meyers said he began hearing multiple requests for the MAWL on a civilian platform. The company soon went to work on a commercial variant that fit within FDA regulations but kept to B.E. Meyers’ commitment to high-quality, functioning gear.

“We determined that with some new components and some new ways we were doing things that we could actually have a laser that had increased performance as a civilian, legal laser over the military versions of our competitors. Once we figured out that, it was a no-brainer,” Meyers said.

The company tentatively slipped the MAWL C1+ into the marketplace and waited to see what kind of response, if any, would return.

High-end gear usually comes with high-end prices. Retailing in the thousands, consumers purchasing these products are laying down some serious coin, but the gear makers behind these lasers say the civilian market doesn’t seem to mind dropping wads of cash for solid accessories.

“I think that you have a consumer base who wants to make educated decisions and is spending their money wisely and wants to make sure they’re getting the best. That’s where we’ve seen MAWL be successful,” Meyers said.

Steiner Optics produces the civilian legal DBAL-D2 and DBAL-A3, green laser units based off the company’s military versions. VP of Sales and Marketing Ron Godlewski told Guns.com in an email that while civilians know there are cheaper alternatives in play, they want to boast the best out in the field and on the range.

“Yes, a civilian can buy a very low-priced illuminator, made of some plastic compound and cheap electronics, but when they’ve made the investment in night vision and a high-quality weapon, why wouldn’t they want the same unit used by law enforcement and elite military units around the world?” Godlewski said.

Though the military applications of top-notch laser gear for night vision ops are obvious, some question the civilian applications for products like the DBAL. Godlewski has an answer for that.

“The larger spot beam of the DBAL-­D2 made it a perfect fit for low-­light and no-­light target shooting and hunting. So if an enthusiast has made the leap to night vision, they would naturally look for an accessory that can target with an IR Laser and illuminate with a spot beam – that’s the DBAL­-D2.”

In addition to the MAWL and DBAL, there’s another contender in the high-end laser market. EOTech, which has long been synonymous with military level optics, opened up IR laser gear to a new customer base — civilians.

John Bailey, director of marketing and product development for EOTech told Guns.com in an email the company was originally eyeing the law enforcement market when developing the ATPIAL, but civilians have really taken to the design as well.

“For law enforcement, it is another tool in the tool box. In low or no­-light conditions, they can use the IR aiming laser and a night vision device and virtually be undetected and give them an immediate aiming dot,” Bailey said. “For the consumer, I believe the draw is to have the same products that the military and law enforcement use. ATPIAL’s can be very advantageous for night predator or hog hunting to provide undetected aiming as well.”

So what’s next for this wave of pricey laser, IR, civilian gear? Is there enough space in the industry and enough interest to compel these companies to continue to innovate on the consumer platform?

“I am not sure,” Bailey said of the future. “I do believe that there could be greater demand for good and better commercial IR (eye­safe) devices. Because they are dependent on night vision, as the NV prices come down, the interest and demand for IR lasers should rise.”

Steiner’s Godlewski summed up his thoughts by saying that the future lies in the interests of shooters. With hog hunting and night vision shooting gaining in popularity, shooters will absolutely need quality infrared gear to keep up.

Out of all these gear makers, Meyers’ hope is the most infectious. He doesn’t talk with uncertainty about the future, but with the determination that the pairing of intelligent consumers and quality gear will ensure there’s room in the industry.

“The community self-regulates really well,” Meyers said. “It really goes back to you’re going to have something that has value retained in it. It works. It’s going to work five years from now. All lasers are not created equal out there and you do get what you pay for.”

While the exact future of expensive gun gear is uncertain, right now business is good and B.E. Meyers, Steiner Optics and EOTech all seem hopeful and ready to tackle the next phase in black rifle gear.