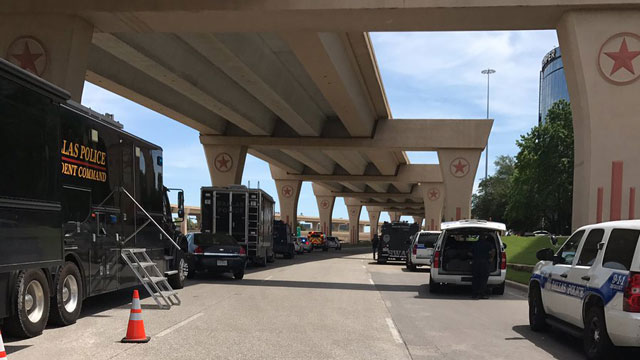 Reports of an active shooter shut down the LBJ Freeway for about two hours. (Photo: Dallas Police Department)

Two people died Monday morning inside a Dallas office building in what is being described as a murder-suicide.

Assistant Police Chief Randy Blankenbaker said in a press conference that the names of the deceased would not be released, pending notification of next of kin, but confirmed the victim was a supervisor at the office and the shooter was a subordinate. There was no indication that the shooting was a domestic-related incident.

Blankenbaker said authorities received a call about an active shooter near the LBJ Freeway Service Road around 10:45 a.m. Officers responded to the scene and instructed individuals inside the office building to shelter in place.

Officers learned that the shooter was inside the meeting room of a particular office used a shotgun to breech the front door. Blankenbaker said that was the only shot fired by law enforcement.

Authorities then entered the office and located the meeting room. There, they discovered a deceased white female, believed to be the office supervisor, and a deceased white male, who was the woman’s subordinate. Blankenbaker said they believe the male entered the room and shot the female before turning the gun on himself. Witnesses who heard the gunfire described the two shots as being very close together.

Although he did not indicate how many, Blankenbaker said the meeting room where the shooting occurred was occupied by other employees at the time.

It’s unclear at this point what type of gun was used in the shooting, but Blankenbaker said the suspect was carrying a gym bag when he entered the office building, prompting a response from the Bureau of Alcohol, Tobacco, Firearms and Explosives. Blankenbaker said they weren’t sure if the bag contained other weapons or possibly a bomb and the ATF was called in as a precautionary measure.

After breaching the office, authorities searched the building floor by floor to ensure there were no additional suspects and the tenants who were told to shelter in place were all safe. The tenants were escorted out and the all-clear was given at 12:49 p.m. At that point, the investigative team entered the building.

Blankenbaker said they aren’t sure at this point if Monday was a regular work day for the suspect or whether it was his day off. It’s also unclear whether he had been recently or was set to be terminated from his position with the company.

Blankenbaker said, because they do not want any speculation about the victims’ identities, the name of the office or what type of work they do there has not been made public. Blankenbaker said the office building is occupied by a number of different tenants with various businesses.

Although an officer suffered a minor injury from flying debris while breaching the office door, there were no additional injuries reported.

“One of the things that we’ve done over the past few years is trained our officers to deal with active shooters by addressing the threat and trying to stop it so that we do not have multiple casualties and multiple victims,” Blankenbaker said. “That is what these officers did.”