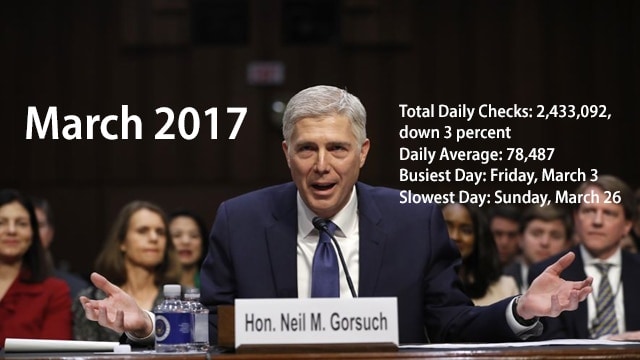 “The well-covered theory seemed to be that purchases would subside once the ‘threat’ of Obama and Clinton policies were exhausted,” the National Rifle Association said in a blog post earlier this month. “The numbers tell a different story.”

The busiest day all month long came on Friday, March 3, when dealers processed 105,113 background check applications. The day clocked in at the fourth busiest so far this year.

A Guns.com analysis of daily NICS checks found applications typically slump on Sundays, recovering throughout the week until peaking on Fridays. Therefore, a busy Friday isn’t unusual in NICS trends.

Virginia Gov. Terry McAuliffe, however, vetoed a package of pro-gun bills on March 24 and instead called for a restoration of a handgun rationing law repealed in 2012.

“One-Handgun-a-Month was enacted almost a quarter century ago to counter Virginia’s shameful reputation as the gun-running capital of the East Coast,” he said. “Five years ago, the General Assembly took the ill-advised step of repealing this common-sense limitation. As a result, Virginia is once again becoming the go-to state for criminals to purchase weapons in bulk.”

The measures McAuliffe rejected would have allowed active duty military members to carry a concealed handgun without a permit and those protected by restraining orders the option to carry without a permit for 45 days following the order’s implementation date, Guns.com previously reported.

He said the bill “perpetuates the dangerous fiction that the victims of domestic violence will be safer by arming themselves.”

“It would inject firearms into a volatile domestic violence situation, making that situation less safe, not more,” he said.

“I am unaware of a single instance in which a person who could lawfully possess a gun was denied a permit to carry a concealed pistol,” he said. “Over the last three years, Minnehaha and Pennington Counties have turned down nearly 600 permit applicants who were disqualified due to mental illness or due to violent or drug-related crimes.”

He based his veto of the second proposal on a belief that trained law enforcement offer more protection than a concealed carry permit holder.

“Where emotions can run high, it is important to be protected by people who are routinely trained to manage dangerous situations,” he said.

At the federal level, President Donald Trump kicked off the month by signing a Republican-crafted bill undoing an Obama-era rule stripping gun rights from 75,000 Social Security recipients. The rule, published in Federal Register just weeks before the former president left office, outlined a new process for identifying and reporting certain beneficiaries for mental health reasons to the FBI and NICS.

The proposed rule drew ire from both sides of the aisle and organizations typically at odds — including the NRA and the American Civil Liberties Union.

“We oppose this rule because it advances and reinforces the harmful stereotype that people with mental disabilities, a vast and diverse group of citizens, are violent,” the ACLU said in a letter addressed to Congress last month. “There is no data to support a connection between the need for a representative payee to manage one’s Social Security disability benefits and a propensity toward gun violence.”

“Whatever is in Heller is the law, and I follow the law,” Gorsuch told the Senate Judiciary Committee after Sen. Dianne Feinstein, D-Calif., probed the federal judge about his stance on banning “weapons most useful in military service.”

“Heller makes clear the standard that we judges are supposed to apply,” he said. “The questions is whether it’s a gun in common use for self-defense and that may be subject to reasonable regulation. That’s the test as I understand it. There’s lots of ongoing litigation about which weapons qualify under those standards and I can’t pre-judge that litigation.”

Background check applications appeared to fluctuate independently of current events in March — peaking on March 3 and dropping off by the end of the month by more than 100,000 compared to the first three weeks.

The slowest day of the month — March 26th — coincided with the year’s worst mass shooting thus far, when a gunman opened fire in a Cincinnati nightclub, killing one and wounding more than a dozen others.

Background checks in the week following the shooting slumped to monthly lows, with the daily average falling by more than 10,000 checks compared with the week before.