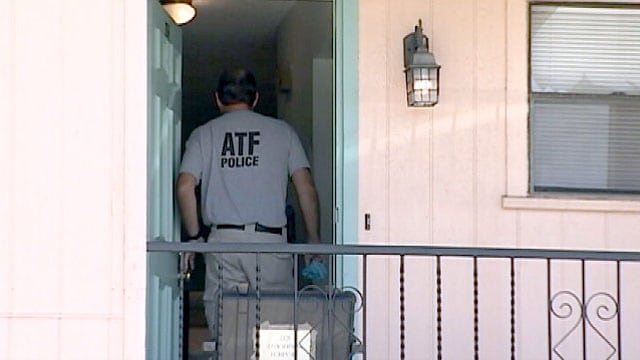 The raid of a Florida vacation home was conducted alongside the men’s arrests. (Photo: WFTV)

Two Florida men were arrested last week after they attempted to sell drugs and guns – including a gun previously stolen from an Orange County sheriff’s deputy – to an undercover narcotics agent.

Christopher Dickerson, 38, and David Heineman, 62, of Sanford, are both charged with conspiracy to distribute controlled substances, while Dickerson also faces charges for being a felon in possession of a firearm.

According to a criminal complaint, Dickerson and Heineman became the subject of an investigation last month after the undercover agent discovered the duo was illegally in possession of multiple firearms, as well as a large amount of narcotics.

A confidential informant was also working with authorities and provided information about the two dealing drugs. The informant, although compensated monetarily, has successfully worked with law enforcement for some time, following the fatal drug overdose of a family member.

The confidential informant worked as a “middle man” to set up a transaction between Dickerson and Heineman and the undercover agent. The transaction was to involve the purchase of powder cocaine, heroin, two bulletproof vests, and nine firearms for $4,500. Of the nine guns, three were determined to be stolen, including a .45-caliber Glock that was stolen from the vehicle of an Orange County Sheriff’s deputy on March 23, 2017.

As the transaction unfolded, police arrested Dickerson and Heineman, and a subsequent search of their properties was conducted.

Agents with the Bureau of Alcohol, Tobacco, Firearms and Explosives retrieved numerous bags containing evidence from a Titusville vacation home occupied by Dickerson and Heineman.

Stephen Ferguson, who was staying at the resort with his wife when the raid was conducted, later spoke with reporters. He called the entire ordeal “a little scary.”

If convicted, Dickerson faces life in prison, while Heineman faces up to 20 years.

According to the Justice Department, this case is being prosecuted as part “Project Safe Neighborhoods,” a nationwide program aimed at reducing gun violence.