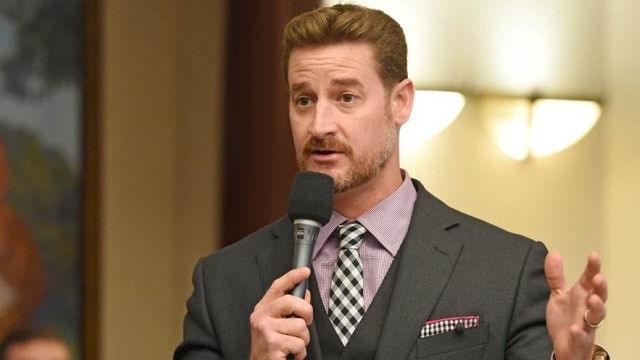 Republican Florida Sen. Greg Steube has proposed 10 pro-gun bills so far in the 2017 Florida Legislature, but only one has gained traction. (Photo: Greg Steube via Facebook)

Lawmakers in the Florida Senate advanced a bill Tuesday that would allow gun owners with concealed carry permits to store their firearms with security in courthouses.

The Miami Herald reported the measure, Senate Bill 616, was approved in its final Senate committee Tuesday and will now head to the Senate floor for a vote.

The proposal will likely pass in the Senate. However, a companion bill was never filed in the House, which minimizes the chance that the bill becomes law this year.

The bill’s sponsor, Sen. Greg Steube, proposed 10 other pro-gun bills this year, but SB 616 is the only one that has so far been approved.

The other bills’ failures can largely be attributed to fellow Republican Sen. Anitere Flores refusing to support the rest of Steube’s proposals, many of which were aimed at eliminating gun-free zones in the state.

The full Senate vote on Steube’s courthouse bill is expected to take place on Friday.