Norm Hatch, a Marine Corps cameraman who witnessed one of the most iconic moments in World War II passed away Saturday at the age of 96. He was the last living Marine who was present for the iconic flag raising at Iwo Jima.

With a hand-cranked 16mm camera, Hatch, who enlisted in the Corps in 1939 and later joined the photographic unit, captured moments in combat that later made their way into award-winning films.

In 1945, Hatch, having survived one of the bloodiest battles fought in the Pacific in World War II, was with the group of soldiers when the order came to raise a larger flag atop Mt. Suribachi on Iwo Jima.

Hatch, who was 24-years-old at the time, grabbed Staff Sgt. Bill Genaust and PFC Bob Campbell and headed up the hill to join the group as they planted the flag. But some way up the hill, they ran into Associated Press photographer Joe Rosenthal, who had previously worked with Campbell at the San Francisco Chronicle. The two men greeted one another and Rosenthal decided to head up the hill with the trio.

As the men worked to replace the smaller flag with the larger one, Campbell and Genaust captured the moments on both still shots and film, as Rosenthal worked to create a better vantage point.

As the six servicemen raised the flag, Rosenthal captured the famous photo. 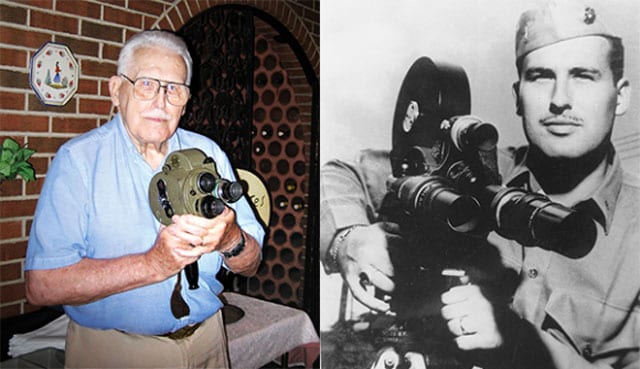 Had Hatch not grabbed Campbell to hike up the hill, Rosenthal may not have spontaneously decided to go along, and the iconic photo may have never been captured. In addition, Hatch ended up carrying the film taken by Genaust, who was later killed in combat before leaving the island.

In 1946, Hatch retired from the Marines but brought his military and photographic experience to a variety of other positions, which included consultant to the White House Press Office through four administrations.

Hatch’s family has plans for a memorial service later this year at Arlington National Cemetery.