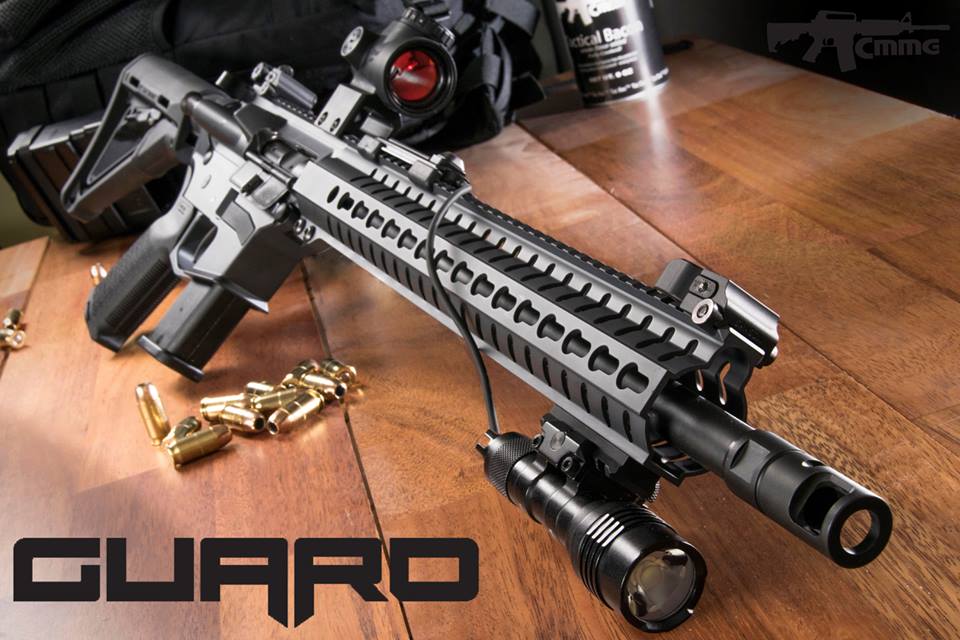 Available in five configurations, with both 8-inch and 16-inch barrel options, the Guard operates on CMMG’s new Radial Delayed Blowback system. The Radial Delayed Blowback system has a bolt carrier group that appears similar to direct impingement AR-15s, however, its operation is vastly different. Utilizing a rotating bolt slows down the bolt carrier group so that it can safely cycle the .45 ACP round all the while resulting in a lighter carbine with less felt recoil.

Placing a high emphasis on fully functioning AR-15 controls, the Guard also boasts an all new patent pending, dual-pinned, fully machined bolt catch linkage. This allows consistent and reliable operation straight out of the box with no fine-tuning required.

“With the Guard, we set out to engineer an affordable, highly reliable AR chambered in .45 ACP that would use the widely ­available Glock magazines. In the early stages of design, we tested out a variety of different operating systems, including straight blowback and direct impingement, but none of those options gave us the reliability we were looking for. We ultimately came up with the design for the Radial Delayed Blowback system and from there, all the pieces started falling into place,” said Chris Reinkemeyer, CEO/CFO at CMMG.

Accompanied with a 13-round factory Glock 21 magazine, CMMG recommends using factory double-stack Glock .45 ACP mags for best performance and reliability. CMMG says that bolt weight kits will be sold separately for shooters wishing to adjust the Guard to accept +P ammunition or suppressors.