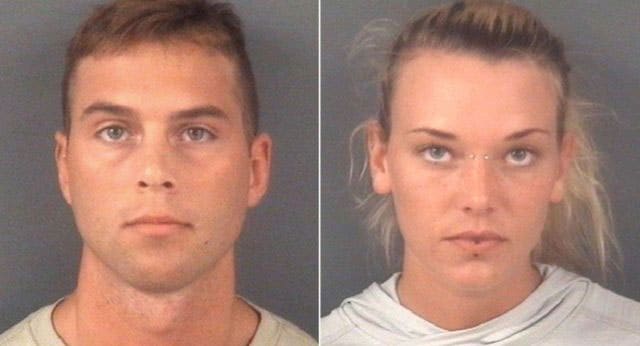 A former soldier and her active-duty boyfriend are facing charges after they reportedly tied the woman’s service dog to a tree, shot the animal, then posted a video of the act on social media.

Former Spc. Marinna Rollins, 23, and Spc. Jarren Heng, 25, were charged with cruelty to animals in a Cumberland County, North Carolina, court this week.

The pit bull originally belonged to Rollins husband, who is also in the military, but soon after they separated, Rollins’ husband found out he was going to South Korea and asked her to take the dog. Rollins took the dog and later completed paperwork certifying “Cam” as an emotional support animal for PTSD.

But Rollins eventually decided Cam was costing her too much money and told everyone the dog was going to a new home. But instead of sending the animal to a new home, she and Heng tied the dog to a tree and shot it five times with a rifle, giggling and carrying on all while recording the act.

The couple then uploaded the video to the internet and authorities were contacted soon thereafter.

Rollins and Heng were both arrested and slapped with a $25,000 bail.

Rollins joined the Army in 2014, but was administratively separated in January for reasons which were not disclosed. Heng is part of a unit within the Army Special Operations Command.