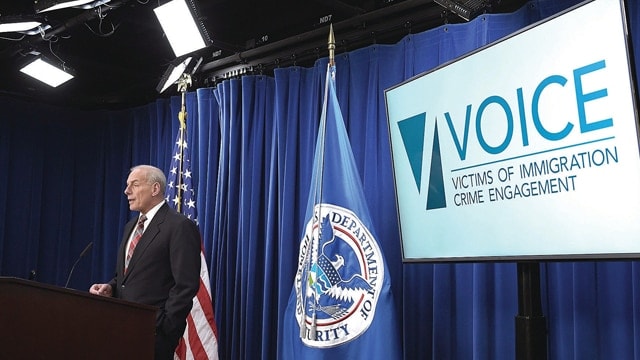 Department of Homeland Security Secretary John Kelly announced a new office Wednesday that will provide information and services to victims of immigration crime.

The Victims of Immigration Crime Engagement Office, or VOICE, was called for in President Donald Trump’s Jan. 25 executive order.

The order mandates “an office to provide proactive, timely, adequate, and professional services to victims of crimes committed by removable aliens and the family members of such victims.”

The president announced plans for the office at a joint session of Congress last month, saying such victims are “ignored by our media, and silenced by special interests.”

“All crime is terrible, but these victims are unique,” said Secretary Kelly. “They are casualties of crimes that should never have taken place — because the people who victimized them often times should not have been in the country in the first place.”

The office, which will operate under U.S. Immigration and Customs Enforcement, will have 27 so-called “victim assistance specialists” who will provide information and resources, and help victims understand the immigration enforcement and removal process. Also part of Wednesday’s roll-out is the Victim Information and Notification Exchange, or DHS VINE. The network allows victims to sign up for alerts and track the immigration custody status of undocumented immigrant criminals.

ICE officials say this initial roll out is just the start, and the VOICE office will expand in the future. It’s being funded through “existing resources,” according to ICE’s website. And if the victim happens to be an undocumented immigrant, the office “will not inquire as to a victim’s immigration status through VOICE.”

The roll out of the new office comes a week after the Justice Department threatened to withhold federal grants from nine sanctuary jurisdictions if they don’t prove compliance with a federal immigration law. The effort to withhold funds was blocked Tuesday by a judge in San Francisco.