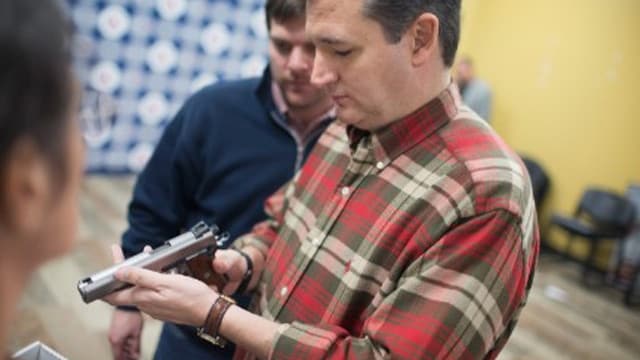 Texas Sen. Ted Cruz signed on as a co-sponsor to the Hearing Protection Act days before he’s scheduled to speak at the National Rifle Association’s annual convention, where the bill is expected to be a major talking point.

The proposed measure has so far gained 14 co-sponsors, all Republicans, in the U.S. Senate and a related measure in the House has gained 137 co-sponsors, including three Democrats.

This legislative session is the second round for the bill. When it was proposed in the Senate in 2015, it gained only three sponsors. While the Texas senator was not one of them, he is known among gun rights groups for his no-compromise stance on guns, even picking up a presidential endorsement by Gun Owners of America during his campaign.

If passed, the HPA would remove silencers from items listed on the National Firearms Act, which requires buyers to complete legal paperwork and pay a $200 tax before obtaining one. According to the bill’s language, silencers would be regulated like rifles.

Supporters of the measure argue silencers should be treated as a safety device because it reduces the sound of a gunshot and helps to prevent hearing damage.

Yet, critics of the measure say it would only be a matter of time until they’re used to commit crimes. The items were prohibited along with machine guns and short-barreled long guns in 1934 as a response to prohibition-era gang violence.

Still, gun rights supporters have expressed optimism that the measure will pass this go around as they think President Trump will sign it if it makes it to his desk. His son, Donald Trump, Jr., has already thrown his support behind it.

Cruz is scheduled to appear alongside President Trump and other political leaders at the NRA’s Leadership Forum on Friday.