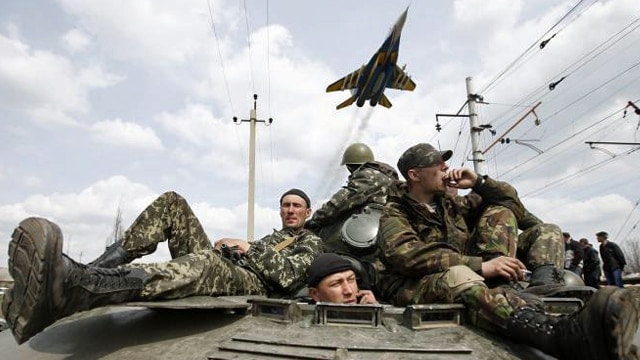 A fighter jet flies over Ukrainian soldiers as they sit on an armored personnel carrier in eastern Ukraine in April 2014. (Photo: Marko Djurica/Reuters)

The revolution and instability in Ukraine in recent years has helped bolster the illegal gun trade in the country, which, according to a report released this month, has as many as 5 million unregistered firearms in the hands of civilians.

Conflicts in eastern Ukraine, on the border with Russia, have had a destabilizing effect that’s seen a significant number of guns taken from national stockpiles, according to the report, entitled Measuring Illicit Arms Flows: Ukraine.

The paper was put together by the Small Arms Survey, an independent research project based in Geneva, Switzerland. Drawing on interviews conducted in Kiev in August 2016, the paper also relied on public statistics and weapons data. The briefing paper on Ukraine is one of several reports on illegal gun flows, with previous papers focusing on Somalia, Honduras and Niger. The project was born out of the 2030 Agenda for Sustainable Development, a September 2015 United Nations charter. The agenda outlines 17 goals, one of which seeks to “significantly reduce illicit … arms flows” in certain countries by 2030.

More than 45 million people live in the former Soviet-controlled Ukraine, a nation without a primary gun law regulating the manufacture, possession, or storage of firearms.

“The existing framework consists of a patchwork of regulations issued by various authorities, including the main regulating document issued as an instruction of the Ministry of the Interior in 1998,” the report says. “Members of Parliament … and the Ukrainian cabinet presented 14 draft laws to Parliament between 1998 and 2014 to rectify this problem, but none of these proposals has been adopted to date.”

Private citizens are prohibited from owning pistols. Citizens 21 and older can own shotguns, and citizens over 25 can own rifles. There is no limit to the number of guns a Ukrainian citizen can own, according to the report.

The patchwork of laws makes it difficult for researchers to differentiate between legal and illegal weapons, the author admits, a fact that “complicates efforts to monitor and address illicit arms flows.”

Still, estimates of unregistered “small arms” in the hands of Ukrainian civilians range from 3 million to 5 million. Efforts to confiscate those weapons have made a small dent in that figure. From 2013 to 2016, an average of between 1,000 and 2,500 weapons have been seized by officials in Ukraine.

The number of homicides in the country spiked from 5,861 in 2013, to 11,466 to 2014, before dipping again in 2015. But those figures only paint a limited picture, as it’s unclear how many of those homicides were perpetrated with firearms. Additionally, the numbers include combat casualties from the ongoing conflict in eastern Ukraine, “which the government legally does not consider an armed conflict, but an anti-terrorism operation.”

Still, the briefing paper offers ways to reduce the number of illegal weapons in the country.

“Ensuring parliamentary approval of long-pending legislative measures, under- taking ongoing reforms at the Ministry of the Interior, improving cooperation among the relevant agencies—Interior Ministry, SBU, Border Guards, Defence Ministry, Customs—and increasing cooperation with neighbouring countries are among the measures the government can take to address the proliferation of illicit small arms in Ukraine,” the report says.

“Without them, the size and make-up of illicit arms  flows in Ukraine will remain difficult to monitor and reduce, to the detriment of national security and Ukrainian citizens’ safety,” the report says.