Somali pirate sentenced to life in prison for attack on U.S. ship 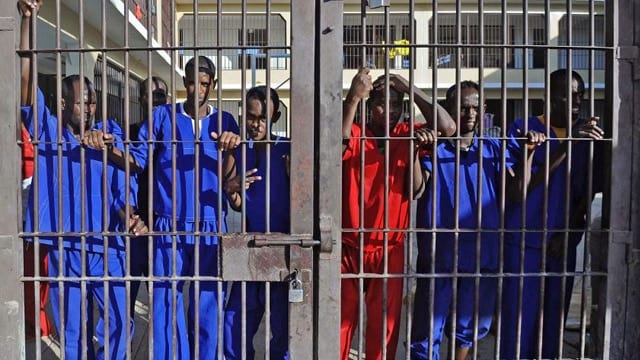 A Somali pirate was sentenced Wednesday to life plus 10 years in prison for his role in an attack on a U.S. Navy ship seven years ago.

Mohamed Farah, 31, is the sixth man to be sentenced for the attack on the USS Ashland on April 10, 2010, according to a Department of Justice news release.

From aboard a skiff in the Gulf of Aden, the men fired several shots at the vessel, according to court documents. When the Ashland returned fire, the skiff exploded and the men were retrieved from the water.

“Individuals onboard the USS Ashland photographed the burning skiff, which reveal that the vessel contained ladders, a hook, and what appeared to be the burnt remains of an AK47 assault weapon,” the documents read.

A federal jury found Farah guilty in February 2013 of all 10 counts against him, including conspiracy to commit hostage-taking, piracy under the law of nations, attack to plunder vessel, assault with a dangerous weapon on federal officers, and other charges.

“These men were pirates – plain and simple,” said then-U.S. Attorney Neil MacBride in a 2013 statement. “They attacked a ship hoping to hold it ransom for millions of dollars. Few crimes are older than piracy on the high seas, and today’s verdict shows that the United States takes it very seriously.”

Farah’s co-conspirators include Jama Idle Ibrahim, who was sentenced to 15 years in prison; Mohamed Ali Said, who was sentenced to 33 years; and Mohamed Abdi Jama and Abdicasiis Cabaase, who were each sentenced to life plus 30 years. Two months before the April 2010 attack on the Ashland, these four men went to sea and tried to pirate another vessel. They were intercepted by the HMS Chatham of the United Kingdom’s Royal Navy.

The remaining pirate from the Ashland attack is Abdi Abshir Osman, who was sentenced to life plus 10 years in federal prison.