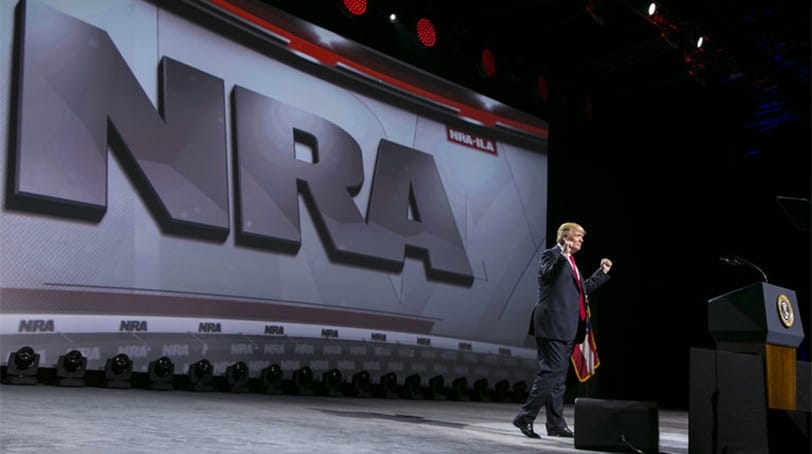 ATLANTA—President Donald Trump on Friday addressed National Rifle Association members and others during the gun lobby group’s annual convention in Atlanta, making him the first sitting president to do so since Ronald Reagan in 1983.

He opened his speech thanking members of the NRA for their patriotism and support of his campaign for president, which he then recapped, slamming Democratic nominee Hillary Clinton and candidate Bernie Sanders.

Trump criticized Sanders for offering free college to Americans without saying how it would be paid for. However, regardless of whether or not Sanders’ plan was a viable one, he often said he would impose a higher tax rate on the richest Americans to pay for this lofty campaign promise.

Trump went on to recognize veterans and touted his administration’s progress in rehabbing the embattled agency.

“We are doing a really top job already … with the Veterans Administration,” Trump said.

The president signed an executive order on Thursday to create a new VA office in order to hold its employees accountable. The order also offers protection to VA whistleblowers who report unscrupulous activity within the agency.

Last year, the loss of Supreme Court Justice Antonin Scalia left a hole in the country’s highest court and was a serious loss to the gun rights community.

Trump said the fact that the Senate’s confirmation of his pick to replace Scalia, Neil Gorsuch, happened within his first 100 days in office hadn’t happened since 1881.

The American sportsman has a champion Trump’s new pick for Department of the Interior. “On his first day,” Secretary Ryan Zinke reversed a lead ammo ban which had been enacted on federal land to reportedly prevent the toxic material from leaching into the ground water and protect carrion wildlife from consuming lead in the carcasses of other animals.

Trump also talked about maintaining the rule of law, which includes keeping the average citizen armed in self-defense.

“Our police and sheriffs know that when you ban guns, only the criminals will have them,” Trump said.

Attorney General Jeff Sessions is working to enforce the rule of law, Trump said. The president called out MS-13, an international Hispanic street gang with roots in El Salvador and a significant foothold in neighborhoods across the U.S. His attorney general is working to get rid of the scourge, Trump said.

“We will build the wall,” no matter the number: Trump said the U.S. has seen a 73 percent decrease in illegal immigration since his inauguration.

Trump also touched on terrorism, criticizing politicians for spending billions on fighting terrorism across the globe, “but then we let terrorism enter through the front door,” he said.