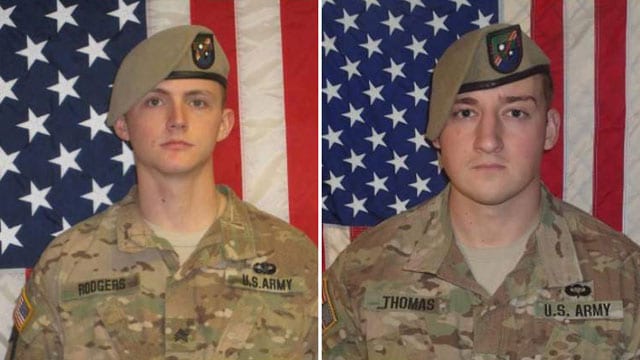 Two U.S. soldiers were killed during a night raid on an ISIS-K camp in Nangarhar Province, Afghanistan, Wednesday.

The Department of Defense identified the servicemen as Sgt. Joshua P. Rodgers, 22, of Bloomington, Illinois; and Sgt. Cameron H. Thomas, 23, of Kettering, Ohio. They were assigned to the 3rd Battalion, 75th Ranger Regiment, Fort Benning, Georgia, and their deaths came as the result of “small arms fire while engaged in dismounted operations.”

According to a statement from the United States Forces – Afghanistan, Army Rangers and Afghan Special Security Forces conducted the raid, which began around 10:30 p.m., Afghanistan time. The soldiers entered the area via helicopter and, within minutes of touching the ground, the soldiers were met with “intense fire from multiple directions.” The firefight lasted about three hours.

The target of the raid was an ISIS-K leader, known as an emir, Abdul Hasib. It is believed that Hasib was killed during the operative, along with “several high-level ISIS-K leaders and upwards of 35 fighters.” There were believed to be no civilian casualties.

“Fighting alongside their Afghan partners, Josh and Cameron proved themselves willing to go into danger and impose a brutal cost on enemies in their path,” Defense Secretary Jim Mattis said in a statement.

“They carried out their operation against [the Islamic State of Iraq and Syria-Khorasan] in Afghanistan before making the ultimate sacrifice to defend our nation and our freedoms,” Mattis continued. “Our nation owes them an irredeemable debt, and we give our deepest condolences to their families.”

While the details surrounding the deaths of the Rangers have not been released and are still under investigation, the U.S. Forces-Afghanistan suggested that the soldiers’ deaths may have been the result of friendly fire. However, eyewitnesses and more than a dozen Rangers with direct knowledge of the operation, say the suggestion simply is not true.

“This is tainting the memory of the fallen with unneeded controversy,” one anonymous service member said.