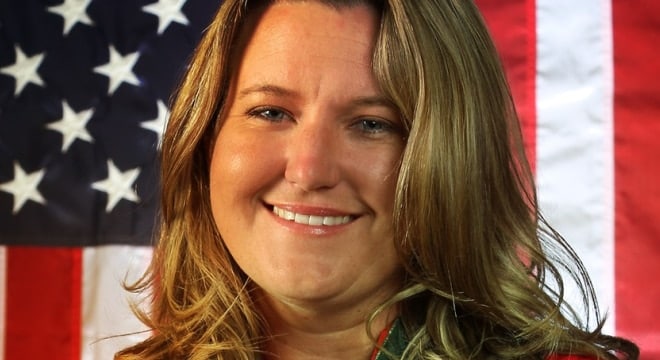 Rhode won an Olympic gold medal in double trap at the 1996 Atlanta Games five days after her 17th birthday — the youngest female Olympic shooting champion in the Games’ history — and is planning on making the Tokyo Olympics in 2020 her seventh. (Photo: NRA)

Among the 27 people announced to serve new terms on the National Rifle Association’s board over the weekend was six-time Olympian Kim Rhode Harryman.

Rhode, of Big Bear Lake, California, has been an honorary board member of the California State Rifle and Pistol Association, the NRA’s state affiliate and is NRA Women’s Tips & Tactics Instructor. She was a staunch advocate for gun rights during the last election cycle, and was featured in ads against California Lt. Gov. Gavin Newsom’s Proposition 63, even sparring with him on social media over the initiative’s ammo restrictions.

Rhode was elected to a one-year term on the NRA board ending in 2018.

One board member up for reelection, Roy Innis, died prior to the election and his seat was filled temporarily by Willes K. Lee of Honolulu, Hawaii. Lee was subsequently elected to a two-year term ending in 2019.

Of the group elected as a whole, most were long-term members who have served on the board for years and included such recognizable gun culture icons as Tom Selleck and R. Lee Ermy.

Among those who lost bids to the board are former directors James S Gilmore III and John L Cushman along with three candidates profiled earlier this year by Guns.com: N. Stephanie Spika, Adam Kraut, and Stephen D Stamboulieh.

Rhode, currently competing at the ISSF World Cup in Cyprus where she picked up a silver medal last week in Women’s Skeet, was not available for comment, but we did catch up with her at SHOT Show earlier this year.