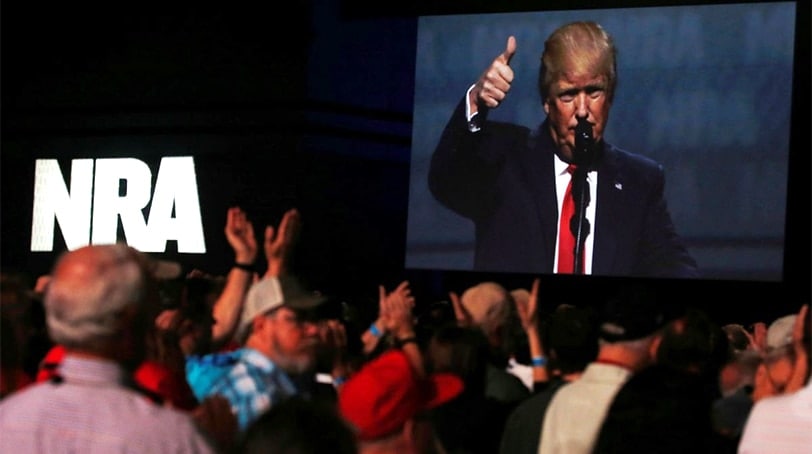 President Donald Trump on Friday addressed a sizable crowd of gun rights supporters during the National Rifle Association’s annual leadership forum, making it his third consecutive appearance at the convention and the first time a sitting president has spoken at the gun rights group’s event since Ronald Reagan.

Trump offered a recap on the elections that won him the presidency and offered a small update on the progress his administration has made so far. His speech lacked specifics on any of the NRA’s policy pushes the president has vowed to back, like national concealed carry reciprocity between states and legalizing suppressors for the sake of hearing protection.

Gun control groups like Everytown for Gun Safety oppose the measures because, in the case of reciprocity, some states have weaker gun laws than others. As for hearing protection, opponents say gun owners should stick with ear plugs rather than being able to suppress the sound of a gunshot and make it more difficult for law enforcement to locate a criminal shooter.

Though Trump’s speech remained vague on policy, he did offer NRA members a promise to never compromise their gun rights.

“As your President, I will never, ever infringe on the right of the people to keep and bear arms. Never ever,” Trump said. “Freedom is not a gift from government. Freedom is a gift from God.”

Last year, Trump’s NRA speech also contained campaign rhetoric. The race for the presidency was in full swing and it was heated.

With a Supreme Court vacancy at the time, left by the death of Second Amendment champion Justice Antonin Scalia, stakes were high for conservatives and gun rights advocates.

Now, despite having a Republican president and a GOP-controlled congress, there could continue to be an increase in campaign rhetoric with the 2018 midterms on the horizon and Democrats looking to win the House and oppose Trump’s agenda.