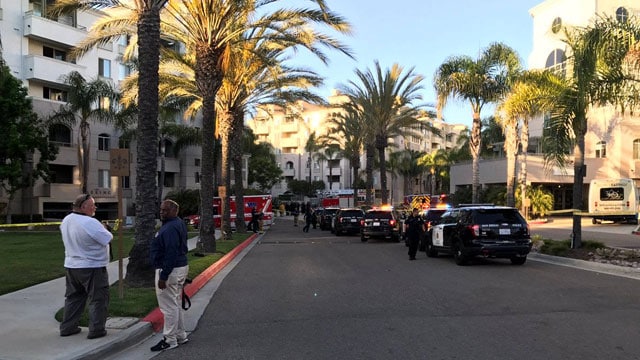 Police say the suspect called his ex-girlfriend in the middle of his shooting rampage. (Photo: CBS)

A pool party at a San Diego condominium over the weekend became the scene of a senseless act of violence at the hands of a man distraught over a recent break-up.

Altogether, seven people were shot. One victim died as a result of the injuries she sustained, two more remain hospitalized in critical but stable condition, one man suffered a broken bone while trying to escape from the gunfire, and the suspect was killed by law enforcement, who were fired upon as they arrived on the scene, according to statement by the San Diego Police Department.

San Diego Police Chief Shelley Zimmerman said they received a call about a shooting in progress just after 6 p.m. on Sunday and multiple calls continued to come in as police were en route. Twenty officers as well as a helicopter were on the scene within about seven minutes of the first call.

First responders and security personnel worked quickly to render first aid to the victims and get them transported to the hospital. During a press conference with city officials, San Diego Mayor Kevin Faulconer praised police and first responders for their efforts and suggested responding officers “precluded further bloodshed.”

Authoriteis identified the shooter as Peter Selis, 49. Selis’ family said his girlfriend had recently broken up and he had been “distraught and depressed” over it, but there was no indication he was capable of carrying out such an act of violence.

Investigators determined that Selis, who lived at the complex, entered the pool area and shot two people, then sat on a poolside lounge chair and called his ex-girlfriend from his cell phone. According to Zimmerman, Selis told the woman he just shot two people and the police were on their way. Then, with his ex-girlfriend still on the phone, Selis continued to shoot at the victims.

“It is apparent that he wanted his ex-girlfriend to listen in as he carried out his rampage,” Zimmerman said, adding they do not think the shooting was planned, but rather a “spontaneous act of violence,” nor is there any indication the victims were targeted rather than chosen at random.

“The victims were targeted for no reason other than their mere presence in the vicinity of the suspect,” Zimmerman said.

The deceased victim was identified by friends and family as Monique Clark. The names of the other victims, who are all expected to recover, have not been released.