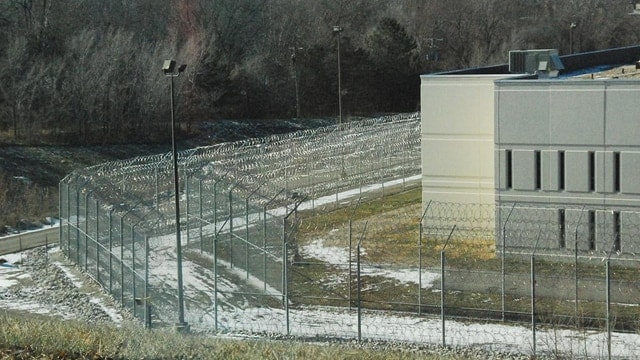 The exterior of the CoreCivic’s detention center in Leavenworth, KS. (Photo: James Oleson/Flickr)

The Department of Justice said last week the audit of a federal detention center in Kansas raises concerns about a widespread lack of oversight at more than a dozen other facilities nationwide.

The Office of Inspector General released its report on the Leavenworth Detention Center in northeastern Kansas last month in which it documented routine understaffing, over-bunking and a general disregard for prison conditions during a five-year period between October 2010 and May 2015.

“As we state in today’s report, we are concerned that the lack of effective monitoring at Leavenworth may also be a problem at other facilities that hold Marshals Service detainees,” said Deputy Inspector General Rob Storch in a video last week. “The findings … underscore the challenges of ensuring that facilities holding federal inmates and detainees — including those operated by contractors — are well run, and safe and secure for all staff, inmates, and detainees. We will continue to do our part in helping the Justice Department identify and address those challenges.”

Leavenworth Detention Center houses more than 1,100 federal detainees of the U.S. Marshals Service and is one of 15 privately-operated centers across the country. CoreCivic, a Tennessee-based contractor, began managing Leavenworth in 1990 and is 10 years into a potential $697 million contract with the Marshal’s Service, slated to last through 2026.

As of January 2017, only $252 million of the contract had been paid to CoreCivic — though auditors stated the agency may have gotten a better deal, had it shopped around to “ensure the best overall value to the government.”

Instead, auditors contend, the agency limited contractors to the Leavenworth area, but could not provide sufficient evidence to justify such a narrow pool of candidates.

Auditors also discovered routine understaffing at Leavenworth forced the closure of posts identified as critical to ensure the safety of the facility. In just one year examined by auditors, overall staff vacancy reached 11 percent. That rate more than doubled among correctional officers.

Despite the ongoing staffing challenges, CoreCivic didn’t attempt to pull employees from other sites to fill in the necessary posts, but rather implemented mandatory overtime — a decision auditors said “led to lower morale, security concerns, and fewer correctional officers available to escort medical staff and detainees to and from the health services unit.”

“In our judgment, the USMS was inherently reactive,” the audit reads. “Instead of actively monitoring LDC operations to identify discrepancies and thwart potential incidents, the USMS often became aware of incidents after they occurred.”

In another instance, auditors discovered CoreCivic concealed its practice of triple bunking detainees in cells designed for two from the American Correctional Association during its 2011 inspection by uninstalling the extra beds. Auditors suspect the company practiced the same deception before inspections performed in 2005 and 2008.

The association declined taking action against the company because the senior officials involved in the scheme were no longer employed at CoreCivic, according to the report.

“Our audit further determined that the USMS has issued conflicting guidance on the allowability of triple bunking by its contractors, and that it should clearly specify in its new and existing contracts the rules and procedures governing this practice,” the audit reads.

The OIG concluded its report with two dozen recommendations to improve oversight and management at Leavenworth, including attempts to expand its geographical search for future contractors and pay closer attention to staffing shortages and potential solutions.

The Marshals Service concurred with all 24 of the recommendations, while CoreCivic only provided commentary on some of the issues raised in the report.

“We recognize that attracting and retaining qualified staff is a challenge with the corrections industry as a whole,” said Natasha Metcalf, vice president of partnership development for CivicCore, in the company’s official response to the audit dated April 5. “We continue to explore ways to tackle this industry-wide issue. We, along with the USMS, have initiated several efforts to provide greater visibility into staffing and staff vacancies. We are also pursuing measures to recruit additional staff.”

Metcalf continued, “For more than three decades, the company has been an innovative, dependable partner for the government and we appreciate the audit’s efforts to identify areas for improvement in the execution and administration of the Leavenworth contract in the future.”

The U.S. Marshals Service is the latest federal agency to come under scrutiny for oversight issues uncovered in the auditing process. In March, the OIG released a scathing report on the Department of Justice’s mismanagement of confidential informants. Last month during a congressional hearing, lawmakers scolded the Drug Enforcement Administration and the Bureau of Alcohol, Tobacco Firearms and Explosives for creating “a horror show” of theft an abuse.