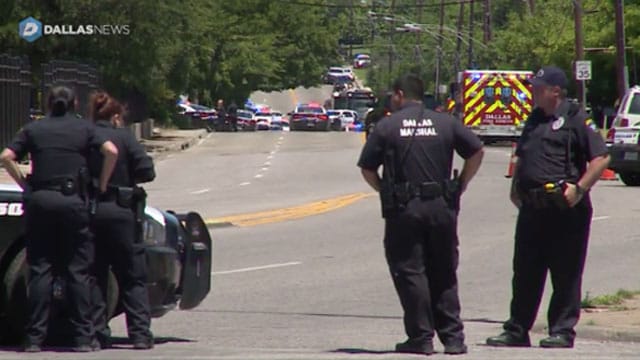 Much of the neighborhood was placed on lockdown as officers worked to ensure the area was safe. (Photo: Dallas Morning News)

Four people were shot in a Dallas neighborhood Monday morning in an incident which officials described as a dispute between two neighbors that escalated to deadly proportions.

A paramedic and a civilian were injured by gunfire and, though initially listed in critical condition, both are expected to survive. Two men were also found deceased — one of them was believed to be the shooter, who died from what appeared to be a self-inflicted gunshot wound. As of late Monday night, authorities had not released any of their names.

The incident unfolded when police received a 911 call about a shooting around 11:31 a.m. Dallas Fire-Rescue were the first to arrive on the scene in an ambulance and immediately upon arrival, found a resident suffering from a gunshot wound. As the EMT went to provide first aid to the injured individual, the EMT was struck by gunfire, the City of Dallas said in a press release.

A short time later, officers arrived on the scene to find the paramedic and the resident both lying in the street suffering from gunshot wounds. The responding officers were also met with gunfire from the suspect, and SWAT was called in.

However, Dallas Interim Police Chief David Pughes said as other officers took cover for safety, Dallas Police Sgt. Robert Watson went in alone and “subjected himself to extreme risk and danger” to help the injured paramedic. Watson pulled the paramedic from the street, placed him in his squad car and rushed him to the hospital, an action that was praised by city officials.

It’s unclear how or when the injured civilian was transported to the hospital, but both the civilian and the paramedic remain in ICU. Dallas Mayor Mike Rawlings confirmed that the paramedic, who suffered severe blood loss, had undergone multiple surgeries and more will be required, along with “extensive medical treatment.”

Some time after arriving on the scene, the suspect barricaded himself inside a home and authorities later used a robot to enter the residence. Inside, they discovered two deceased males, one of whom was believed to be the suspect and appeared to have died from a self-inflicted gunshot wound.

Although not yet confirmed by the authorities, the Dallas Morning News identified the suspect as Derick Lamont Brown, a man with a lengthy criminal history and prior involvement with the Dallas-area New Black Panther Party.

Chief Pughes said the incident is still under investigation and although scarce at this time, additional details will be released as soon as possible.

“The long and the short of this is we had a paramedic that worked diligently and with great vigor to take care of somebody, and we had a great police officer that did the same,” Mayor Rawlings concluded. “Every day, these fire-rescue officers and the police put their lives on the line. We saw it today, and I’m so proud of these guys for taking the action they did.”